Is Ball Corporation (NYSE:BLL) a first-rate investment right now? Money managers are reducing their bets on the stock. The number of long hedge fund positions were trimmed by 6 in recent months. Our calculations also showed that BLL isn’t among the 30 most popular stocks among hedge funds. BLL was in 27 hedge funds’ portfolios at the end of March. There were 33 hedge funds in our database with BLL positions at the end of the previous quarter.

What does the smart money think about Ball Corporation (NYSE:BLL)? 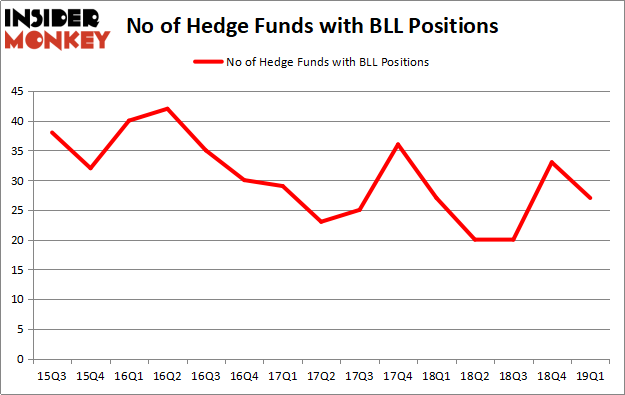 Among these funds, Rivulet Capital held the most valuable stake in Ball Corporation (NYSE:BLL), which was worth $86.5 million at the end of the first quarter. On the second spot was Select Equity Group which amassed $65.8 million worth of shares. Moreover, Brookside Capital, PEAK6 Capital Management, and MD Sass were also bullish on Ball Corporation (NYSE:BLL), allocating a large percentage of their portfolios to this stock.

Due to the fact that Ball Corporation (NYSE:BLL) has faced bearish sentiment from the aggregate hedge fund industry, logic holds that there lies a certain “tier” of fund managers that decided to sell off their positions entirely last quarter. At the top of the heap, Richard Chilton’s Chilton Investment Company sold off the largest investment of the 700 funds monitored by Insider Monkey, valued at close to $146.5 million in stock. David Cohen and Harold Levy’s fund, Iridian Asset Management, also sold off its stock, about $125.7 million worth. These bearish behaviors are interesting, as total hedge fund interest dropped by 6 funds last quarter.

Let’s go over hedge fund activity in other stocks – not necessarily in the same industry as Ball Corporation (NYSE:BLL) but similarly valued. We will take a look at Sasol Limited (NYSE:SSL), IDEXX Laboratories, Inc. (NASDAQ:IDXX), Credicorp Ltd. (NYSE:BAP), and Newmont Goldcorp Corporation (NYSE:NEM). This group of stocks’ market valuations are similar to BLL’s market valuation.

As you can see these stocks had an average of 22.25 hedge funds with bullish positions and the average amount invested in these stocks was $566 million. That figure was $324 million in BLL’s case. Newmont Goldcorp Corporation (NYSE:NEM) is the most popular stock in this table. On the other hand Sasol Limited (NYSE:SSL) is the least popular one with only 5 bullish hedge fund positions. Ball Corporation (NYSE:BLL) is not the most popular stock in this group but hedge fund interest is still above average. Our calculations showed that top 20 most popular stocks among hedge funds returned 1.9% in Q2 through May 30th and outperformed the S&P 500 ETF (SPY) by more than 3 percentage points. Hedge funds were also right about betting on BLL as the stock returned 5.5% during the same period and outperformed the market by an even larger margin. Hedge funds were rewarded for their relative bullishness.