Azul S.A. (NYSE:AZUL) investors should pay attention to an increase in hedge fund interest in recent months. Our calculations also showed that AZUL isn’t among the 30 most popular stocks among hedge funds.

Heading into the second quarter of 2019, a total of 12 of the hedge funds tracked by Insider Monkey were bullish on this stock, a change of 9% from the fourth quarter of 2018. Below, you can check out the change in hedge fund sentiment towards AZUL over the last 15 quarters. With hedgies’ capital changing hands, there exists a select group of notable hedge fund managers who were increasing their holdings meaningfully (or already accumulated large positions). 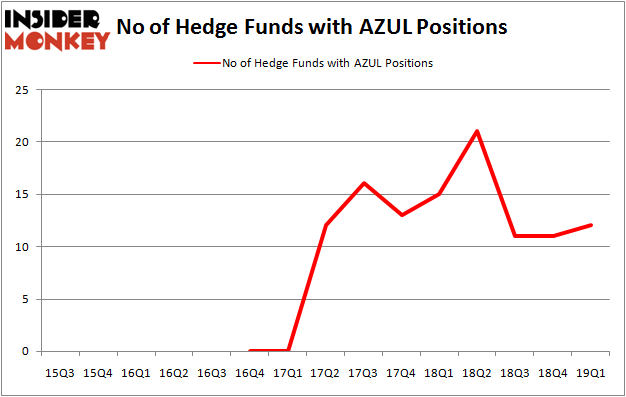 According to publicly available hedge fund and institutional investor holdings data compiled by Insider Monkey, Howard Marks’s Oaktree Capital Management has the most valuable position in Azul S.A. (NYSE:AZUL), worth close to $43.2 million, comprising 0.8% of its total 13F portfolio. The second largest stake is held by ZWEIG DIMENNA PARTNERS, managed by Joe DiMenna, which holds a $42.5 million position; the fund has 4.7% of its 13F portfolio invested in the stock. Other peers with similar optimism encompass Mark Moore’s ThornTree Capital Partners, Jon Bauer’s Contrarian Capital and Ken Griffin’s Citadel Investment Group.

As you can see these stocks had an average of 21.75 hedge funds with bullish positions and the average amount invested in these stocks was $271 million. That figure was $151 million in AZUL’s case. Outfront Media Inc (NYSE:OUT) is the most popular stock in this table. On the other hand BankUnited, Inc. (NYSE:BKU) is the least popular one with only 19 bullish hedge fund positions. Compared to these stocks Azul S.A. (NYSE:AZUL) is even less popular than BKU. Hedge funds clearly dropped the ball on AZUL as the stock delivered strong returns, though hedge funds’ consensus picks still generated respectable returns. Our calculations showed that top 20 most popular stocks among hedge funds returned 6.2% in Q2 through June 19th and outperformed the S&P 500 ETF (SPY) by nearly 3 percentage points. A small number of hedge funds were also right about betting on AZUL as the stock returned 20.4% during the same period and outperformed the market by an even larger margin.