Armada Hoffler Properties Inc (NYSE:AHH) investors should pay attention to an increase in support from the world’s most elite money managers recently. AHH was in 11 hedge funds’ portfolios at the end of March. There were 9 hedge funds in our database with AHH positions at the end of the previous quarter. Our calculations also showed that ahh isn’t among the 30 most popular stocks among hedge funds. 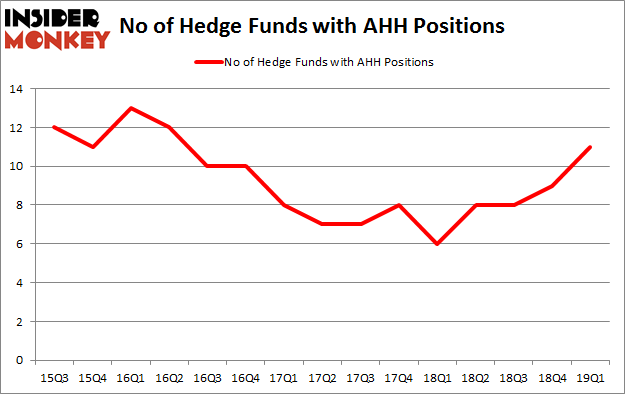 The largest stake in Armada Hoffler Properties Inc (NYSE:AHH) was held by Renaissance Technologies, which reported holding $54.1 million worth of stock at the end of March. It was followed by AQR Capital Management with a $1.2 million position. Other investors bullish on the company included Springbok Capital, Two Sigma Advisors, and Winton Capital Management.

As you can see these stocks had an average of 8.5 hedge funds with bullish positions and the average amount invested in these stocks was $28 million. That figure was $60 million in AHH’s case. Century Aluminum Co (NASDAQ:CENX) is the most popular stock in this table. On the other hand Triumph Bancorp Inc (NASDAQ:TBK) is the least popular one with only 5 bullish hedge fund positions. Armada Hoffler Properties Inc (NYSE:AHH) is not the most popular stock in this group but hedge fund interest is still above average. Our calculations showed that top 20 most popular stocks among hedge funds returned 6.2% in Q2 through June 19th and outperformed the S&P 500 ETF (SPY) by nearly 3 percentage points. Hedge funds were also right about betting on AHH as the stock returned 10% during the same period and outperformed the market by an even larger margin. Hedge funds were rewarded for their relative bullishness.