Is argenx SE (NASDAQ:ARGX) the right investment to pursue these days? The best stock pickers are becoming less confident. The number of long hedge fund bets retreated by 3 lately. Our calculations also showed that argx isn’t among the 30 most popular stocks among hedge funds. ARGX was in 24 hedge funds’ portfolios at the end of March. There were 27 hedge funds in our database with ARGX positions at the end of the previous quarter.

How have hedgies been trading argenx SE (NASDAQ:ARGX)? 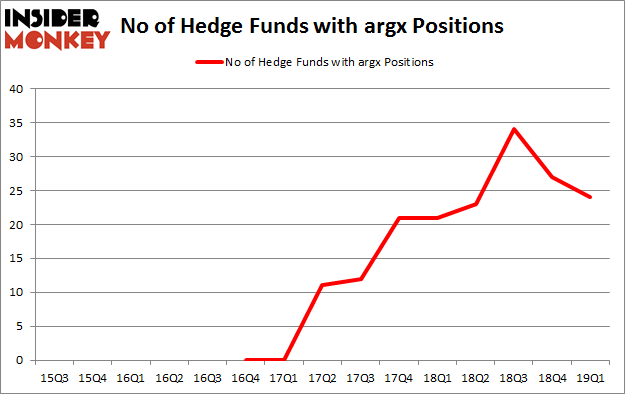 The largest stake in argenx SE (NASDAQ:ARGX) was held by Baker Bros. Advisors, which reported holding $127.3 million worth of stock at the end of March. It was followed by Redmile Group with a $127.2 million position. Other investors bullish on the company included venBio Select Advisor, EcoR1 Capital, and Deerfield Management.

Judging by the fact that argenx SE (NASDAQ:ARGX) has faced declining sentiment from the aggregate hedge fund industry, it’s safe to say that there is a sect of hedge funds that slashed their positions entirely by the end of the third quarter. At the top of the heap, Joseph Edelman’s Perceptive Advisors said goodbye to the biggest position of all the hedgies monitored by Insider Monkey, totaling close to $53.9 million in stock, and Christopher James’s Partner Fund Management was right behind this move, as the fund said goodbye to about $11.3 million worth. These moves are important to note, as total hedge fund interest was cut by 3 funds by the end of the third quarter.

As you can see these stocks had an average of 19.5 hedge funds with bullish positions and the average amount invested in these stocks was $886 million. That figure was $751 million in ARGX’s case. Ascendis Pharma A/S (NASDAQ:ASND) is the most popular stock in this table. On the other hand DCP Midstream LP (NYSE:DCP) is the least popular one with only 2 bullish hedge fund positions. argenx SE (NASDAQ:ARGX) is not the most popular stock in this group but hedge fund interest is still above average. Our calculations showed that top 20 most popular stocks among hedge funds returned 1.9% in Q2 through May 30th and outperformed the S&P 500 ETF (SPY) by more than 3 percentage points. Hedge funds were also right about betting on ARGX as the stock returned 2.6% during the same period and outperformed the market by an even larger margin. Hedge funds were rewarded for their relative bullishness.