Most investors tend to think that hedge funds and other asset managers are worthless, as they cannot beat even simple index fund portfolios. In fact, most people expect hedge funds to compete with and outperform the bull market that we have witnessed in recent years. However, hedge funds are generally partially hedged and aim at delivering attractive risk-adjusted returns rather than following the ups and downs of equity markets hoping that they will outperform the broader market. Our research shows that certain hedge funds do have great stock picking skills (and we can identify these hedge funds in advance pretty accurately), so let’s take a glance at the smart money sentiment towards American Public Education, Inc. (NASDAQ:APEI).

American Public Education, Inc. (NASDAQ:APEI) has seen a decrease in hedge fund interest recently. Our calculations also showed that APEI isn’t among the 30 most popular stocks among hedge funds.

According to most investors, hedge funds are perceived as worthless, old investment tools of the past. While there are over 8000 funds trading at present, We look at the moguls of this club, approximately 750 funds. Most estimates calculate that this group of people command the majority of the hedge fund industry’s total asset base, and by keeping track of their top equity investments, Insider Monkey has formulated numerous investment strategies that have historically surpassed Mr. Market. Insider Monkey’s flagship hedge fund strategy surpassed the S&P 500 index by around 5 percentage points per year since its inception in May 2014 through June 18th. We were able to generate large returns even by identifying short candidates. Our portfolio of short stocks lost 28.2% since February 2017 (through June 18th) even though the market was up nearly 30% during the same period. We just shared a list of 5 short targets in our latest quarterly update and they are already down an average of 8.2% in a month whereas our long picks outperformed the market by 2.5 percentage points in this volatile 5 week period (our long picks also beat the market by 15 percentage points so far this year).

What have hedge funds been doing with American Public Education, Inc. (NASDAQ:APEI)?

At the end of the first quarter, a total of 15 of the hedge funds tracked by Insider Monkey were long this stock, a change of -6% from the fourth quarter of 2018. On the other hand, there were a total of 15 hedge funds with a bullish position in APEI a year ago. With the smart money’s sentiment swirling, there exists a few key hedge fund managers who were upping their stakes substantially (or already accumulated large positions). 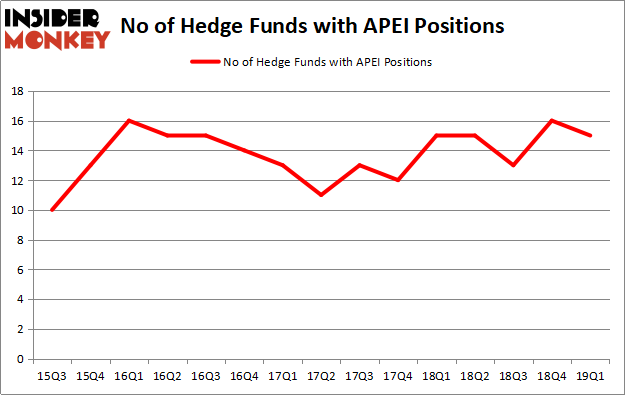 More specifically, Renaissance Technologies was the largest shareholder of American Public Education, Inc. (NASDAQ:APEI), with a stake worth $38.7 million reported as of the end of March. Trailing Renaissance Technologies was AQR Capital Management, which amassed a stake valued at $16.1 million. GLG Partners, D E Shaw, and Millennium Management were also very fond of the stock, giving the stock large weights in their portfolios.

Because American Public Education, Inc. (NASDAQ:APEI) has witnessed declining sentiment from the aggregate hedge fund industry, it’s safe to say that there exists a select few funds that elected to cut their positions entirely heading into Q3. It’s worth mentioning that Richard Chilton’s Chilton Investment Company dropped the largest position of the “upper crust” of funds tracked by Insider Monkey, worth about $0.9 million in stock. Andrew Feldstein and Stephen Siderow’s fund, Blue Mountain Capital, also sold off its stock, about $0.3 million worth. These transactions are important to note, as aggregate hedge fund interest fell by 1 funds heading into Q3.