How do we determine whether American Assets Trust, Inc (NYSE:AAT) makes for a good investment at the moment? We analyze the sentiment of a select group of the very best investors in the world, who spend immense amounts of time and resources studying companies. They may not always be right (no one is), but data shows that their consensus long positions have historically outperformed the market when we adjust for known risk factors.

Hedge fund interest in American Assets Trust, Inc (NYSE:AAT) shares was flat at the end of last quarter. This is usually a negative indicator. At the end of this article we will also compare AAT to other stocks including WesBanco, Inc. (NASDAQ:WSBC), Cal-Maine Foods Inc (NASDAQ:CALM), and SeaWorld Entertainment Inc (NYSE:SEAS) to get a better sense of its popularity.

What have hedge funds been doing with American Assets Trust, Inc (NYSE:AAT)?

At the end of the first quarter, a total of 14 of the hedge funds tracked by Insider Monkey held long positions in this stock, a change of 0% from the previous quarter. By comparison, 15 hedge funds held shares or bullish call options in AAT a year ago. With the smart money’s sentiment swirling, there exists a few noteworthy hedge fund managers who were boosting their holdings considerably (or already accumulated large positions). 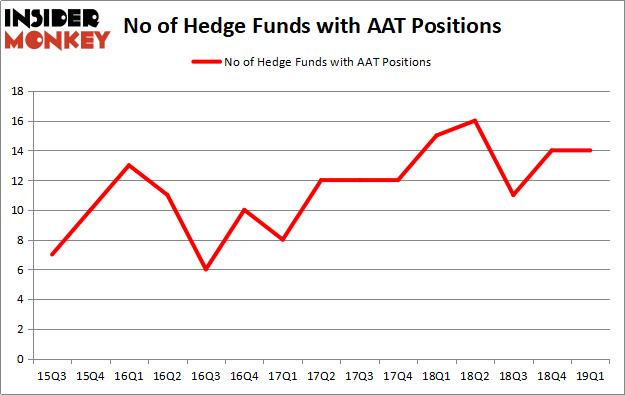 According to publicly available hedge fund and institutional investor holdings data compiled by Insider Monkey, Jeffrey Furber’s AEW Capital Management has the most valuable position in American Assets Trust, Inc (NYSE:AAT), worth close to $81.8 million, comprising 2.3% of its total 13F portfolio. Coming in second is Balyasny Asset Management, led by Dmitry Balyasny, holding a $13.2 million position; 0.1% of its 13F portfolio is allocated to the stock. Other members of the smart money with similar optimism include Noam Gottesman’s GLG Partners, Israel Englander’s Millennium Management and Jim Simons’s Renaissance Technologies.

Because American Assets Trust, Inc (NYSE:AAT) has witnessed a decline in interest from the aggregate hedge fund industry, logic holds that there were a few fund managers that decided to sell off their positions entirely by the end of the third quarter. At the top of the heap, Paul Marshall and Ian Wace’s Marshall Wace LLP said goodbye to the biggest investment of the 700 funds watched by Insider Monkey, worth close to $2.6 million in call options, and Matthew Hulsizer’s PEAK6 Capital Management was right behind this move, as the fund sold off about $0.8 million worth. These moves are intriguing to say the least, as aggregate hedge fund interest stayed the same (this is a bearish signal in our experience).

As you can see these stocks had an average of 16.5 hedge funds with bullish positions and the average amount invested in these stocks was $273 million. That figure was $115 million in AAT’s case. SeaWorld Entertainment Inc (NYSE:SEAS) is the most popular stock in this table. On the other hand WesBanco, Inc. (NASDAQ:WSBC) is the least popular one with only 8 bullish hedge fund positions. American Assets Trust, Inc (NYSE:AAT) is not the least popular stock in this group but hedge fund interest is still below average. Our calculations showed that top 20 most popular stocks among hedge funds returned 6.2% in Q2 through June 19th and outperformed the S&P 500 ETF (SPY) by nearly 3 percentage points. A small number of hedge funds were also right about betting on AAT, though not to the same extent, as the stock returned 4.6% during the same time frame and outperformed the market as well.