After several tireless days we have finished crunching the numbers from nearly 750 13F filings issued by the elite hedge funds and other investment firms that we track at Insider Monkey, which disclosed those firms’ equity portfolios as of March 31. The results of that effort will be put on display in this article, as we share valuable insight into the smart money sentiment towards AC Immune SA (NASDAQ:ACIU).

AC Immune SA (NASDAQ:ACIU) has experienced an increase in support from the world’s most elite money managers recently. ACIU was in 9 hedge funds’ portfolios at the end of the first quarter of 2019. There were 8 hedge funds in our database with ACIU holdings at the end of the previous quarter. Our calculations also showed that aciu isn’t among the 30 most popular stocks among hedge funds. 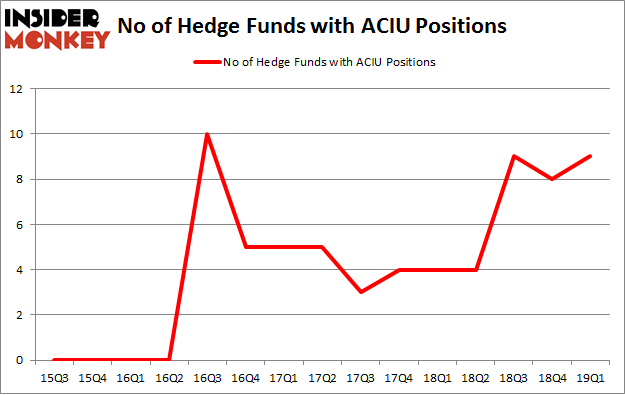 The largest stake in AC Immune SA (NASDAQ:ACIU) was held by Biotechnology Value Fund / BVF Inc, which reported holding $37.7 million worth of stock at the end of March. It was followed by Duquesne Capital with a $6.7 million position. Other investors bullish on the company included Prosight Capital, Renaissance Technologies, and Millennium Management.

As aggregate interest increased, some big names have been driving this bullishness. Prosight Capital, managed by Lawrence Hawkins, established the most valuable position in AC Immune SA (NASDAQ:ACIU). Prosight Capital had $3.6 million invested in the company at the end of the quarter. Israel Englander’s Millennium Management also initiated a $0.9 million position during the quarter. The following funds were also among the new ACIU investors: Michael S. Weiss and Lindsay A. Rosenwald’s Opus Point Partners Management and Jeffrey Talpins’s Element Capital Management.

As you can see these stocks had an average of 7.5 hedge funds with bullish positions and the average amount invested in these stocks was $84 million. That figure was $51 million in ACIU’s case. Hooker Furniture Corporation (NASDAQ:HOFT) is the most popular stock in this table. On the other hand Summit Financial Group, Inc. (NASDAQ:SMMF) is the least popular one with only 2 bullish hedge fund positions. AC Immune SA (NASDAQ:ACIU) is not the most popular stock in this group but hedge fund interest is still above average. Our calculations showed that top 20 most popular stocks among hedge funds returned 6.2% in Q2 through June 19th and outperformed the S&P 500 ETF (SPY) by nearly 3 percentage points. Hedge funds were also right about betting on ACIU as the stock returned 14.7% during the same period and outperformed the market by an even larger margin. Hedge funds were rewarded for their relative bullishness.