A market surge in the first quarter, spurred by easing global macroeconomic concerns and Powell’s pivot ended up having a positive impact on the markets and many hedge funds as a result. The stocks of smaller companies which were especially hard hit during the fourth quarter slightly outperformed the market during the first quarter. Unfortunately, Trump is unpredictable and volatility returned in the second quarter and smaller-cap stocks went back to selling off. We finished compiling the latest 13F filings to get an idea about what hedge funds are thinking about the overall market as well as individual stocks. In this article we will study the hedge fund sentiment to see how those concerns affected their ownership of Aaron’s, Inc. (NYSE:AAN) during the quarter.

Is Aaron’s, Inc. (NYSE:AAN) undervalued? Hedge funds are getting less bullish. The number of bullish hedge fund positions dropped by 1 lately. Our calculations also showed that AAN isn’t among the 30 most popular stocks among hedge funds.

To the average investor there are tons of indicators market participants put to use to size up stocks. A duo of the most underrated indicators are hedge fund and insider trading indicators. Our researchers have shown that, historically, those who follow the best picks of the best fund managers can trounce their index-focused peers by a superb margin (see the details here).

How have hedgies been trading Aaron’s, Inc. (NYSE:AAN)? 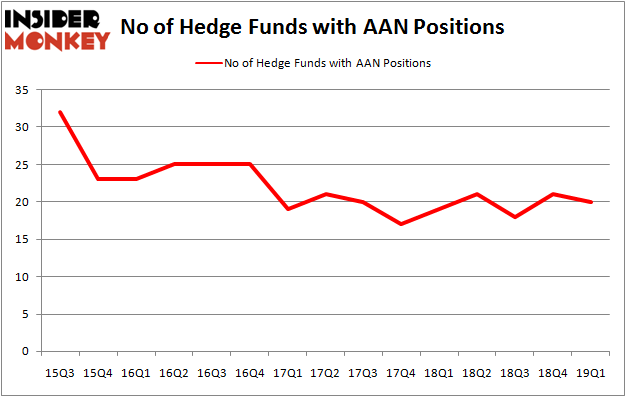 The largest stake in Aaron’s, Inc. (NYSE:AAN) was held by Diamond Hill Capital, which reported holding $47.5 million worth of stock at the end of March. It was followed by D E Shaw with a $36 million position. Other investors bullish on the company included Portolan Capital Management, Arrowstreet Capital, and GAMCO Investors.

Due to the fact that Aaron’s, Inc. (NYSE:AAN) has witnessed falling interest from the aggregate hedge fund industry, it’s easy to see that there were a few hedge funds that elected to cut their entire stakes in the third quarter. Interestingly, Jim Simons’s Renaissance Technologies dropped the largest investment of all the hedgies followed by Insider Monkey, valued at about $9.8 million in call options. Matthew Hulsizer’s fund, PEAK6 Capital Management, also sold off its call options, about $2.6 million worth. These bearish behaviors are intriguing to say the least, as total hedge fund interest was cut by 1 funds in the third quarter.

As you can see these stocks had an average of 18.75 hedge funds with bullish positions and the average amount invested in these stocks was $317 million. That figure was $245 million in AAN’s case. Macquarie Infrastructure Corporation (NYSE:MIC) is the most popular stock in this table. On the other hand NorthWestern Corporation (NYSE:NWE) is the least popular one with only 15 bullish hedge fund positions. Aaron’s, Inc. (NYSE:AAN) is not the most popular stock in this group but hedge fund interest is still above average. Our calculations showed that top 20 most popular stocks among hedge funds returned 1.9% in Q2 through May 30th and outperformed the S&P 500 ETF (SPY) by more than 3 percentage points. Hedge funds were also right about betting on AAN as the stock returned 3.9% during the same period and outperformed the market by an even larger margin. Hedge funds were rewarded for their relative bullishness.