Here’s What Hedge Funds Are Think About Yelp Inc (YELP)

Hedge funds and large money managers usually invest with a focus on the long-term horizon and, therefore, short-lived dips or bumps on the charts, usually don’t make them change their opinion towards a company. This time it may be different. During the fourth quarter of 2018 we observed increased volatility and small-cap stocks underperformed the market. Things completely reversed during the first quarter. Hedge fund investor letters indicated that they are cutting their overall exposure, closing out some position and doubling down on others. Let’s take a look at the hedge fund sentiment towards Yelp Inc (NYSE:YELP) to find out whether it was one of their high conviction long-term ideas.

Is Yelp Inc (NYSE:YELP) an attractive stock to buy now? The best stock pickers are getting more bullish. The number of long hedge fund bets inched up by 9 in recent months. Our calculations also showed that yelp isn’t among the 30 most popular stocks among hedge funds. YELP was in 33 hedge funds’ portfolios at the end of the first quarter of 2019. There were 24 hedge funds in our database with YELP positions at the end of the previous quarter.

In the eyes of most traders, hedge funds are perceived as slow, outdated financial tools of yesteryear. While there are over 8000 funds with their doors open at present, We look at the upper echelon of this club, around 750 funds. Most estimates calculate that this group of people watch over the majority of all hedge funds’ total capital, and by monitoring their highest performing stock picks, Insider Monkey has found a number of investment strategies that have historically outperformed the broader indices. Insider Monkey’s flagship hedge fund strategy outperformed the S&P 500 index by around 5 percentage points a year since its inception in May 2014 through the end of May. We were able to generate large returns even by identifying short candidates. Our portfolio of short stocks lost 30.9% since February 2017 (through May 30th) even though the market was up nearly 24% during the same period. We just shared a list of 5 short targets in our latest quarterly update and they are already down an average of 11.9% in less than a couple of weeks whereas our long picks outperformed the market by 2 percentage points in this volatile 2 week period.

At the end of the first quarter, a total of 33 of the hedge funds tracked by Insider Monkey were long this stock, a change of 38% from the fourth quarter of 2018. Below, you can check out the change in hedge fund sentiment towards YELP over the last 15 quarters. With the smart money’s positions undergoing their usual ebb and flow, there exists a few key hedge fund managers who were boosting their stakes meaningfully (or already accumulated large positions). 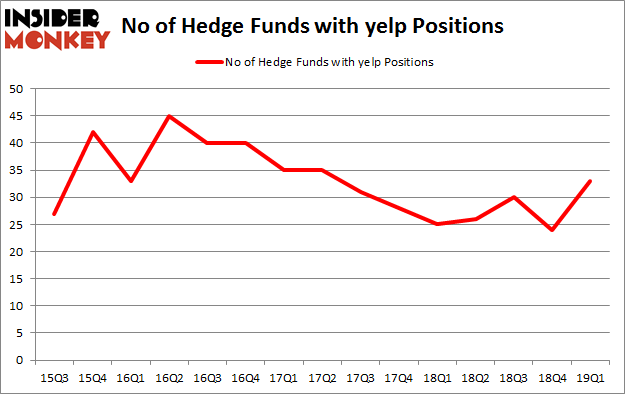 The largest stake in Yelp Inc (NYSE:YELP) was held by Fisher Asset Management, which reported holding $110.2 million worth of stock at the end of March. It was followed by SQN Investors with a $101.8 million position. Other investors bullish on the company included D E Shaw, SoMa Equity Partners, and Millennium Management.