Companies 0 See All
Hedge Funds 0 See All
Insiders 0 See All
Institutional Investors 0 See All
Click here to see all results for Sorry, no results has been found matching your query.
Macroeconomic Predictions-News

Published on November 30, 2012 at 7:12 pm by Jake Mann in Macroeconomic Predictions, News

In early November, the dire predictions of one Apple Inc. (NASDAQ:AAPL) bear were making their way around the blogosphere with frenetic haste. That bear’s name is Jeff Gundlach, CEO of Doubleline Capital, who projected the stock to flirt with $425 next year, when he spoke on CNBC’s Fast Money segment. On the subject, Gundlach stated that he believes Apple is an “an overbelieved stock,” and that “the product innovator [Steve Jobs], as I’ve said over and over again, isn’t there anymore.”

In a new Bloomberg story, we’ve learned that Gundlach’s bearish predictions extend to the entire financial system, as he believes that a “kaboom” is coming, and breaks down how we got here, and where we’re headed in three phases. In the first phase, Gundlach explains that a “27-year buildup of corporate, personal and sovereign debt” inflated itself prior to the most recent financial crisis, and we’re currently in the second phase: a period when the public sector attempts to tackle slowing growth with expansionary monetary policy.

Though Gundlach doesn’t give specifics, he says that his third phase will come in existence if “[d]eeply indebted countries and companies” default on their outstanding obligations. The key, though, is the effects that this could have on not just Apple Inc. (NASDAQ:AAPL), but the entire stock market as a whole. His consensus period is “sometime after 2013,” but even that’s not certain, as he specifically states:

“I don’t believe you’re going to get some sort of an early warning […] You should be moving now.”

It should be said that Gundlach isn’t even pushing his own asset class – Doubleline is a fixed income investment manager – in fact, he’s recommending that investors get into hard assets like real estate, precious gems, and even fine art.

Even though he can’t predict exactly when the next crisis will occur, that doesn’t matter to Gundlach; his argument is why should you be in stocks right now? In the Bloomberg feature, he says that “[i]f phase three takes two years, it’s worth waiting for. The markets don’t have lots of opportunity now.” This is a feeling that many Apple Inc. (NASDAQ:AAPL) investors are likely feeling, as the stock has been essentially flat over the past six months.

Thus, when Gundlach issued his $425 price prediction on shares of AAPL, he didn’t mention that his pessimism extended to the stock market as a whole, which allows us to understand his Cupertino bearishness a bit more. With a beta of 1.21, it goes without saying that there are reasons to be out of Apple Inc. (NASDAQ:AAPL) if you believe a big “kaboom” is coming, and the chart shows this reasoning quite nicely. 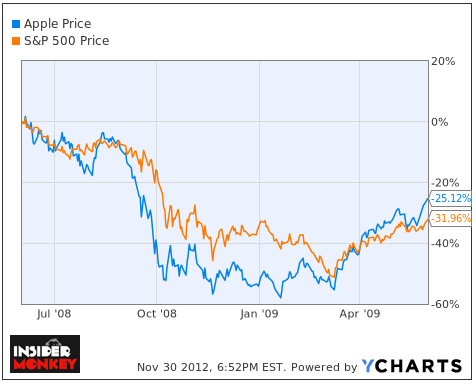 Between June 2008 and 2009, the S&P lost close to 32% while shares of Apple Inc. (NASDAQ:AAPL) lost a little over 25% in value, so it’s clear that Gundlach’s reasoning is justified, as long as you support his original macro hypothesis. In fact, when we take a quarter off of Apple’s present stock price, we come close to his original $425 number. The real question, though, is: why should we take Gundlach’s warnings seriously?

Despite not always getting the recognition he deserves for his foresight, Gundlach was one of the few canaries in the coal mine, so to speak, regarding the subprime mortgage meltdown. Moreover, his DoubleLine Total Return Bond I (MUTF:DBLTX) is considered by most investors to be one of the best bond funds on the market today.

While some will write off his predictions as sensationalism, investors must remember many were calling his bluff in 2006 and 2007, and we see how that worked out for Gundlach’s detractors. What are your thoughts on Jeff Gundlach’s bearish predictions for the global economy? Is it easier to understand his general pessimism over Apple because of this? Let us know in the comments section below, and be sure to check out how hedge funds have traded the stock recently.