In a recently published Q1 2019 Portfolio Update, Newbrook Capital Advisors posted a thorough analysis of Fair Isaac Corporation (NYSE:FICO). If you are interested you can download a copy of the letter here. Among other things, the fund said that it believes the company is a good investment opportunity for a long position for several reasons, those being – Scores Pricing Cycle, Software Business Cloud Transition, Strong Management Team with Aligned Incentives, China Opportunity – each of which the fund further discussed in detail. We bring you that part of the letter:

FICO is a leading information services company primarily serving the financial services industry. Its primary business provides the well-known FICO credit score that is used for the majority of U.S. credit decisions. The credit score business is a high margin licensing business (85% EBITDA margins) in which FICO licenses its methodology, proprietary models, and name to the U.S. credit bureaus (Equifax, Experian, and TransUnion) who then run their data through FICO’s models to produce credit scores. FICO’s secondary software business is a collection of decision management applications that businesses use to optimize operations and customer engagements. FICO has traditionally offered its software in a traditional on-premise deployment model (upfront licenses and maintenance), but over the past five years has transitioned to a ratable cloud subscription model. We believe FICO is a compelling long idea for the following reasons:

Fair Isaac Corporation is a San Jose, California-based data analytics company that was founded back in 1956. It has a market cap of $8.06 billion, and it is trading at a price-to-earnings ratio of 57.19. Since the beginning of the year, Fair Isaac Corporation’s stock gained an amazing 50.47%, having a closing price on April 12th of $279.11.

At the end of the fourth quarter, a total of 24 of the hedge funds tracked by Insider Monkey were bullish on this stock, a change of 14% from the second quarter of 2018. Below, you can check out the change in hedge fund sentiment towards FICO over the last 14 quarters. With the smart money’s capital changing hands, there exists an “upper tier” of noteworthy hedge fund managers who were adding to their stakes significantly (or already accumulated large positions).

According to publicly available hedge fund and institutional investor holdings data compiled by Insider Monkey, Cliff Asness’s AQR Capital Management has the most valuable position in Fair Isaac Corporation (NYSE:FICO), worth close to $57.6 million, corresponding to 0.1% of its total 13F portfolio. The second most bullish fund manager is Royce & Associates, managed by Chuck Royce, which holds a $52.3 million position; the fund has 0.5% of its 13F portfolio invested in the stock. Some other peers with similar optimism contain John W. Rogers’s Ariel Investments, Israel Englander’s Millennium Management and Richard Scott Greeder’s Broad Bay Capital. 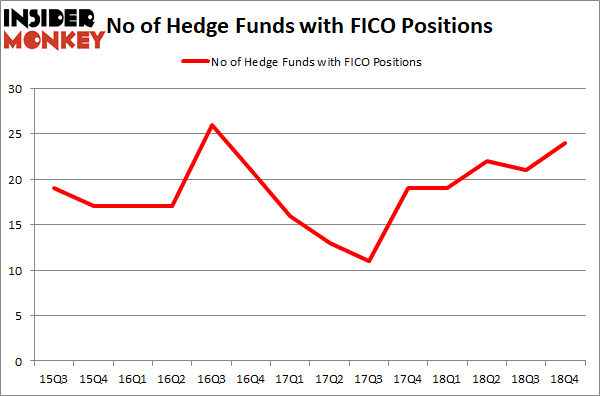