Here is What Hedge Funds Think About Wingstop Inc (WING)

Insider Monkey finished processing more than 700 13F filings made by hedge funds and prominent investors. These filings show these funds’ portfolio positions as of September 30th. In this article we are going to take a look at smart money sentiment towards Wingstop Inc (NASDAQ:WING).

Is Wingstop Inc (NASDAQ:WING) a buy, sell, or hold? The best stock pickers are getting less bullish. The number of long hedge fund positions were cut by 1 lately. Our calculations also showed that WING isn’t among the 30 most popular stocks among hedge funds. WING was in 17 hedge funds’ portfolios at the end of September. There were 18 hedge funds in our database with WING positions at the end of the previous quarter.

At the end of the third quarter, a total of 17 of the hedge funds tracked by Insider Monkey were long this stock, a change of -6% from one quarter earlier. Below, you can check out the change in hedge fund sentiment towards WING over the last 13 quarters. With hedge funds’ capital changing hands, there exists a few key hedge fund managers who were upping their holdings substantially (or already accumulated large positions). 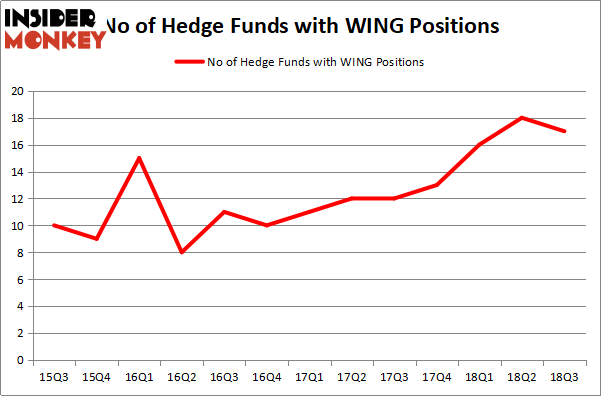 The largest stake in Wingstop Inc (NASDAQ:WING) was held by Renaissance Technologies, which reported holding $38 million worth of stock at the end of September. It was followed by Balyasny Asset Management with a $19.2 million position. Other investors bullish on the company included Driehaus Capital, PDT Partners, and Shellback Capital.

Due to the fact that Wingstop Inc (NASDAQ:WING) has witnessed bearish sentiment from the entirety of the hedge funds we track, we can see that there exists a select few fund managers that elected to cut their positions entirely by the end of the third quarter. It’s worth mentioning that Peter Rathjens, Bruce Clarke and John Campbell’s Arrowstreet Capital dumped the biggest investment of the 700 funds watched by Insider Monkey, totaling close to $11.8 million in stock, and Ken Griffin’s Citadel Investment Group was right behind this move, as the fund sold off about $4 million worth. These moves are intriguing to say the least, as aggregate hedge fund interest fell by 1 funds by the end of the third quarter.

As you can see these stocks had an average of 13 hedge funds with bullish positions and the average amount invested in these stocks was $63 million. That figure was $94 million in WING’s case. Cubic Corporation (NYSE:CUB) is the most popular stock in this table. On the other hand Gold Fields Limited (NYSE:GFI) is the least popular one with only 10 bullish hedge fund positions. Wingstop Inc (NASDAQ:WING) is not the most popular stock in this group but hedge fund interest is still above average. This is a slightly positive signal but we’d rather spend our time researching stocks that hedge funds are piling on. In this regard CUB might be a better candidate to consider a long position.