Is Vocera Communications Inc (NYSE:VCRA) a cheap stock to buy now? Money managers are turning less bullish. The number of long hedge fund positions were trimmed by 4 lately. Our calculations also showed that vcra isn’t among the 30 most popular stocks among hedge funds. VCRA was in 11 hedge funds’ portfolios at the end of the third quarter of 2018. There were 15 hedge funds in our database with VCRA holdings at the end of the previous quarter.

At Q3’s end, a total of 11 of the hedge funds tracked by Insider Monkey were long this stock, a change of -27% from the second quarter of 2018. On the other hand, there were a total of 16 hedge funds with a bullish position in VCRA at the beginning of this year. With hedge funds’ positions undergoing their usual ebb and flow, there exists a select group of key hedge fund managers who were upping their stakes substantially (or already accumulated large positions). 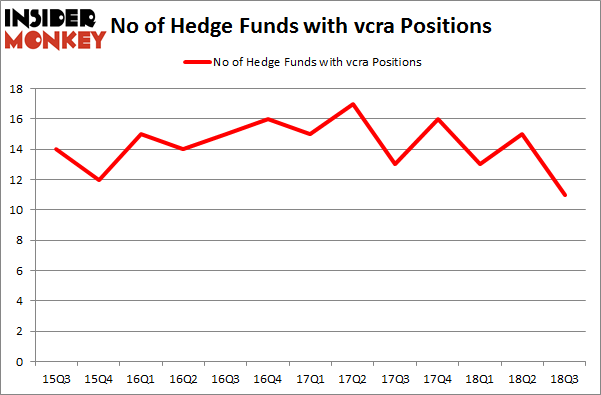 When looking at the institutional investors followed by Insider Monkey, Jim Simons’s Renaissance Technologies has the number one position in Vocera Communications Inc (NYSE:VCRA), worth close to $51.8 million, corresponding to 0.1% of its total 13F portfolio. The second largest stake is held by Two Sigma Advisors, led by John Overdeck and David Siegel, holding a $9.5 million position; less than 0.1%% of its 13F portfolio is allocated to the stock. Remaining peers that hold long positions include Paul Marshall and Ian Wace’s Marshall Wace LLP, Jerome Pfund and Michael Sjostrom’s Sectoral Asset Management and D. E. Shaw’s D E Shaw.

Judging by the fact that Vocera Communications Inc (NYSE:VCRA) has witnessed falling interest from the aggregate hedge fund industry, logic holds that there is a sect of fund managers who sold off their positions entirely heading into Q3. It’s worth mentioning that Mark Broach’s Manatuck Hill Partners cut the biggest investment of all the hedgies monitored by Insider Monkey, worth an estimated $6.6 million in call options, and Israel Englander’s Millennium Management was right behind this move, as the fund sold off about $1.2 million worth. These transactions are important to note, as aggregate hedge fund interest fell by 4 funds heading into Q3.

As you can see these stocks had an average of 11.75 hedge funds with bullish positions and the average amount invested in these stocks was $69 million. That figure was $91 million in VCRA’s case. Chico’s FAS, Inc. (NYSE:CHS) is the most popular stock in this table. On the other hand Compass Diversified Holdings LLC (NYSE:CODI) is the least popular one with only 4 bullish hedge fund positions. Vocera Communications Inc (NYSE:VCRA) is not the least popular stock in this group but hedge fund interest is still below average. This is a slightly negative signal and we’d rather spend our time researching stocks that hedge funds are piling on. In this regard CHS might be a better candidate to consider a long position.