Is United Natural Foods, Inc. (NYSE:UNFI) ready to rally soon? Money managers are getting less bullish. The number of bullish hedge fund positions went down by 3 lately. Our calculations also showed that unfi isn’t among the 30 most popular stocks among hedge funds.

Heading into the second quarter of 2019, a total of 12 of the hedge funds tracked by Insider Monkey held long positions in this stock, a change of -20% from the previous quarter. Below, you can check out the change in hedge fund sentiment towards UNFI over the last 15 quarters. So, let’s review which hedge funds were among the top holders of the stock and which hedge funds were making big moves. 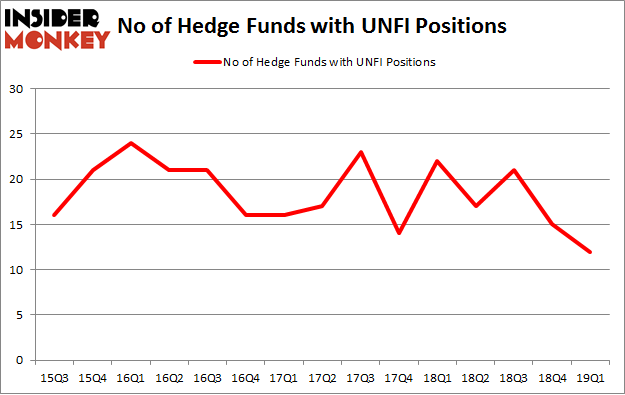 When looking at the institutional investors followed by Insider Monkey, Chuck Royce’s Royce & Associates has the biggest position in United Natural Foods, Inc. (NYSE:UNFI), worth close to $10.5 million, amounting to 0.1% of its total 13F portfolio. Sitting at the No. 2 spot is Two Sigma Advisors, led by John Overdeck and David Siegel, holding a $9.7 million position; less than 0.1%% of its 13F portfolio is allocated to the stock. Some other members of the smart money with similar optimism consist of Charles Lemonides’s Valueworks LLC, Ken Griffin’s Citadel Investment Group and Jonathan Kolatch’s Redwood Capital Management.

Seeing as United Natural Foods, Inc. (NYSE:UNFI) has experienced a decline in interest from hedge fund managers, it’s safe to say that there is a sect of hedge funds that slashed their entire stakes last quarter. It’s worth mentioning that Peter Rathjens, Bruce Clarke and John Campbell’s Arrowstreet Capital cut the biggest investment of all the hedgies watched by Insider Monkey, totaling an estimated $10.4 million in stock. Cliff Asness’s fund, AQR Capital Management, also sold off its stock, about $1.9 million worth. These moves are important to note, as aggregate hedge fund interest was cut by 3 funds last quarter.

As you can see these stocks had an average of 8.75 hedge funds with bullish positions and the average amount invested in these stocks was $33 million. That figure was $48 million in UNFI’s case. Hersha Hospitality Trust (NYSE:HT) is the most popular stock in this table. On the other hand Byline Bancorp, Inc. (NYSE:BY) is the least popular one with only 3 bullish hedge fund positions. United Natural Foods, Inc. (NYSE:UNFI) is not the most popular stock in this group but hedge fund interest is still above average. This is a slightly positive signal but we’d rather spend our time researching stocks that hedge funds are piling on. Our calculations showed that top 20 most popular stocks among hedge funds returned 6.2% in Q2 through June 19th and outperformed the S&P 500 ETF (SPY) by nearly 3 percentage points. Unfortunately UNFI wasn’t nearly as popular as these 20 stocks and hedge funds that were betting on UNFI were disappointed as the stock returned -27.9% during the same period and underperformed the market. If you are interested in investing in large cap stocks with huge upside potential, you should check out the top 20 most popular stocks among hedge funds as 13 of these stocks already outperformed the market so far in Q2.