Is Union Pacific Corporation (NYSE:UNP) the right pick for your portfolio? The smart money is taking an optimistic view. The number of bullish hedge fund positions increased by 4 in recent months. Our calculations also showed that UNP isn’t among the 30 most popular stocks among hedge funds. UNP was in 53 hedge funds’ portfolios at the end of the third quarter of 2018. There were 49 hedge funds in our database with UNP holdings at the end of the previous quarter.

At the end of the third quarter, a total of 53 of the hedge funds tracked by Insider Monkey held long positions in this stock, a change of 8% from the previous quarter. Below, you can check out the change in hedge fund sentiment towards UNP over the last 13 quarters. So, let’s see which hedge funds were among the top holders of the stock and which hedge funds were making big moves. 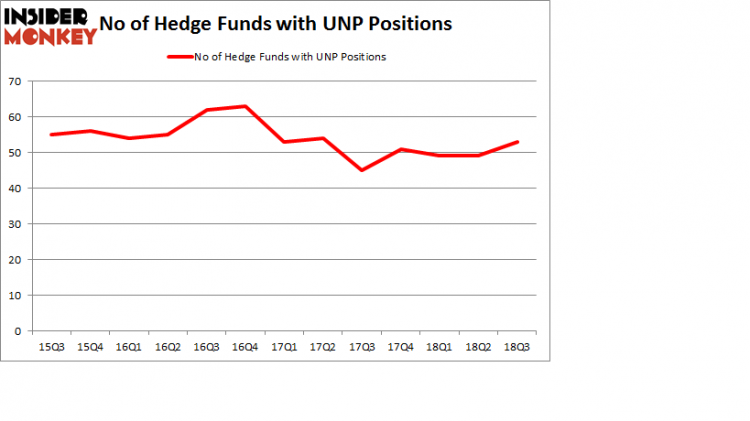 Of the funds tracked by Insider Monkey, Egerton Capital Limited, managed by John Armitage, holds the most valuable position in Union Pacific Corporation (NYSE:UNP). Egerton Capital Limited has a $1.2966 billion position in the stock, comprising 9.6% of its 13F portfolio. The second most bullish fund manager is Eric W. Mandelblatt and Gaurav Kapadia of Soroban Capital Partners, with a $835.2 million position; the fund has 12.8% of its 13F portfolio invested in the stock. Some other members of the smart money that are bullish contain Stephen Mandel’s Lone Pine Capital, Peter Rathjens, Bruce Clarke and John Campbell’s Arrowstreet Capital and Ken Griffin’s Citadel Investment Group.

Let’s go over hedge fund activity in other stocks – not necessarily in the same industry as Union Pacific Corporation (NYSE:UNP) but similarly valued. We will take a look at salesforce.com, inc. (NYSE:CRM), BHP Group Plc (NYSE:BBL), Royal Bank of Canada (NYSE:RY), and Eli Lilly and Company (NYSE:LLY). All of these stocks’ market caps match UNP’s market cap.

As you can see these stocks had an average of 39.75 hedge funds with bullish positions and the average amount invested in these stocks was $2.26 billion. That figure was $4.92 billion in UNP’s case. salesforce.com, inc. (NYSE:CRM) is the most popular stock in this table. On the other hand BHP Billiton plc (NYSE:BBL) is the least popular one with only 16 bullish hedge fund positions. Union Pacific Corporation (NYSE:UNP) is not the most popular stock in this group but hedge fund interest is still above average. This is a slightly positive signal but we’d rather spend our time researching stocks that hedge funds are piling on. In this regard CRM might be a better candidate to consider a long position.