Here is What Hedge Funds Think About Unilever N.V. (UN)

The government requires hedge funds and wealthy investors with over a certain portfolio size to file a report that shows their positions at the end of every quarter. Even though it isn’t the intention, these filings level the playing field for ordinary investors. The latest round of 13F filings disclosed the funds’ positions on September 30. We at Insider Monkey have made an extensive database of more than 700 of those elite funds and prominent investors’ filings. In this article, we analyze how these elite funds and prominent investors traded Unilever N.V. (NYSE:UN) based on those filings.

Hedge fund interest in Unilever N.V. (NYSE:UN) shares was flat at the end of last quarter. This is usually a negative indicator. At the end of this article we will also compare UN to other stocks including DowDuPont Inc. (NYSE:DWDP), AbbVie Inc (NYSE:ABBV), and International Business Machines Corp. (NYSE:IBM) to get a better sense of its popularity.

To most market participants, hedge funds are seen as slow, outdated financial tools of yesteryear. While there are more than 8,000 funds in operation today, Our researchers look at the upper echelon of this group, around 700 funds. It is estimated that this group of investors handle the majority of the smart money’s total capital, and by tracking their matchless equity investments, Insider Monkey has deciphered many investment strategies that have historically beaten Mr. Market. Insider Monkey’s flagship hedge fund strategy outperformed the S&P 500 index by 6 percentage points annually since its inception in May 2014 through early November 2018. We were able to generate large returns even by identifying short candidates. Our portfolio of short stocks lost 24% since February 2017 (through December 3rd) even though the market was up nearly 23% during the same period. We just shared a list of 11 short targets in our latest quarterly update.

What does the smart money think about Unilever N.V. (NYSE:UN)? 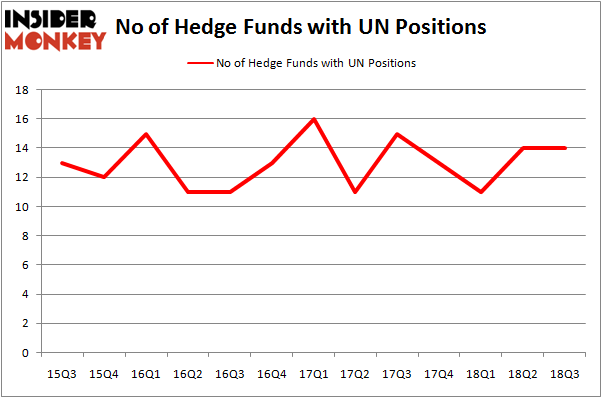 The largest stake in Unilever N.V. (NYSE:UN) was held by Gardner Russo & Gardner, which reported holding $817.9 million worth of stock at the end of September. It was followed by Fisher Asset Management with a $234.4 million position. Other investors bullish on the company included Wallace Capital Management, Arrowstreet Capital, and Yacktman Asset Management.

Seeing as Unilever N.V. (NYSE:UN) has faced falling interest from the smart money, logic holds that there is a sect of funds that elected to cut their positions entirely by the end of the third quarter. Interestingly, Jim Simons’s Renaissance Technologies said goodbye to the biggest position of the “upper crust” of funds followed by Insider Monkey, comprising close to $16.6 million in stock, and John Overdeck and David Siegel’s Two Sigma Advisors was right behind this move, as the fund said goodbye to about $2.7 million worth. These moves are important to note, as total hedge fund interest stayed the same (this is a bearish signal in our experience).

As you can see these stocks had an average of 49.5 hedge funds with bullish positions and the average amount invested in these stocks was $2.94 billion. That figure was $1.12 billion in UN’s case. DowDuPont Inc. (NYSE:DWDP) is the most popular stock in this table. On the other hand AbbVie Inc (NYSE:ABBV) is the least popular one with only 40 bullish hedge fund positions. Compared to these stocks Unilever N.V. (NYSE:UN) is even less popular than ABBV. Considering that hedge funds aren’t fond of this stock in relation to other companies analyzed in this article, it may be a good idea to analyze it in detail and understand why the smart money isn’t behind this stock. This isn’t necessarily bad news. Although it is possible that hedge funds may think the stock is overpriced and view the stock as a short candidate, they may not be very familiar with the bullish thesis. In either case more research is warranted.

Is Heartland Express, Inc. (HTLD) A Good Stock To Buy?
Monthly Newsletter Strategy
Download a free copy of our newsletter and see the details inside!
Hedge Fund Resource Center
Related News
There’s Something About Unilever N.V. (UN) That Billionaire Ken Fisher Loves Billionaire Ken Fisher is Bullish About These Dividend Stocks 10 Biggest Advertisers in the World 11 Most Popular Snacks In The World Do Hedge Funds Love Unilever N.V. (ADR) (UN)? 10 Most Successful Innovative Companies in The World in 2016 This 1 Crucial Trait May Determine The Winner Of The Biofuel Wars 11 Best Inexpensive Bourbons Under $25 That Don’t Taste Cheap 10 Best Vacation Spots for Singles in Their 40’s 15 Highest Paid YouTubers of 2018
Billionaire Hedge Funds