The New York Times Company (NYSE:NYT) shareholders have witnessed a decrease in activity from the world’s largest hedge funds lately. 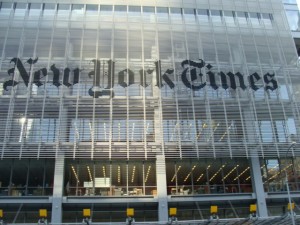 To most investors, hedge funds are seen as slow, outdated financial vehicles of the past. While there are over 8000 funds trading at the moment, we at Insider Monkey look at the top tier of this group, around 450 funds. It is estimated that this group has its hands on the majority of the smart money’s total capital, and by monitoring their best investments, we have figured out a number of investment strategies that have historically beaten the market. Our small-cap hedge fund strategy outstripped the S&P 500 index by 18 percentage points annually for a decade in our back tests, and since we’ve began to sharing our picks with our subscribers at the end of August 2012, we have outperformed the S&P 500 index by 23.3 percentage points in 8 months (check out a sample of our picks).

Equally as integral, positive insider trading activity is another way to break down the stock market universe. Just as you’d expect, there are many reasons for an upper level exec to drop shares of his or her company, but only one, very obvious reason why they would initiate a purchase. Various empirical studies have demonstrated the useful potential of this tactic if shareholders understand what to do (learn more here).

With these “truths” under our belt, let’s take a glance at the key action regarding The New York Times Company (NYSE:NYT).

What does the smart money think about The New York Times Company (NYSE:NYT)?

In preparation for this quarter, a total of 16 of the hedge funds we track were bullish in this stock, a change of 0% from the previous quarter. With hedge funds’ capital changing hands, there exists a few notable hedge fund managers who were upping their holdings substantially.

According to our comprehensive database, Irving Kahn’s Kahn Brothers had the most valuable position in The New York Times Company (NYSE:NYT), worth close to $50.5 million, comprising 7.4% of its total 13F portfolio. Sitting at the No. 2 spot is James H. Litinsky of JHL Capital Group, with a $15.2 million position; 1.1% of its 13F portfolio is allocated to the stock. Some other peers that hold long positions include Chuck Royce’s Royce & Associates, Larry Foley and Paul Farrell’s Bronson Point Partners and Jim Simons’s Renaissance Technologies.

Judging by the fact that The New York Times Company (NYSE:NYT) has faced bearish sentiment from the aggregate hedge fund industry, it’s easy to see that there was a specific group of hedgies who were dropping their positions entirely heading into Q2. Intriguingly, Mike Vranos’s Ellington cut the largest investment of the 450+ funds we monitor, worth about $0.6 million in stock.. David Costen Haley’s fund, HBK Investments, also cut its stock, about $0.1 million worth. These bearish behaviors are important to note, as aggregate hedge fund interest stayed the same (this is a bearish signal in our experience).

Insider buying is particularly usable when the company we’re looking at has seen transactions within the past 180 days. Over the last 180-day time frame, The New York Times Company (NYSE:NYT) has experienced 2 unique insiders buying, and zero insider sales (see the details of insider trades here).