Here is What Hedge Funds Think About The Kroger Co. (KR)

Most investors tend to think that hedge funds and other asset managers are worthless, as they cannot beat even simple index fund portfolios. In fact, most people expect hedge funds to compete with and outperform the bull market that we have witnessed over the past few years. However, hedge funds are generally partially hedged and aim at delivering attractive risk-adjusted returns rather than following the ups and downs of equity markets hoping that they will outperform the broader market. Our research shows that hedge funds do have great stock picking skills, so let’s take a glance at the smart money sentiment towards The Kroger Co. (NYSE:KR).

The Kroger Co. (NYSE:KR) investors should be aware of an increase in enthusiasm from smart money in recent months. KR was in 30 hedge funds’ portfolios at the end of the third quarter of 2018. There were 29 hedge funds in our database with KR holdings at the end of the previous quarter. Our calculations also showed that KR isn’t among the 30 most popular stocks among hedge funds.

In the financial world there are a multitude of signals stock traders have at their disposal to assess stocks. A couple of the less utilized signals are hedge fund and insider trading signals. We have shown that, historically, those who follow the top picks of the elite investment managers can beat their index-focused peers by a superb amount (see the details here).

We’re going to go over the latest hedge fund action regarding The Kroger Co. (NYSE:KR).

What does the smart money think about The Kroger Co. (NYSE:KR)? 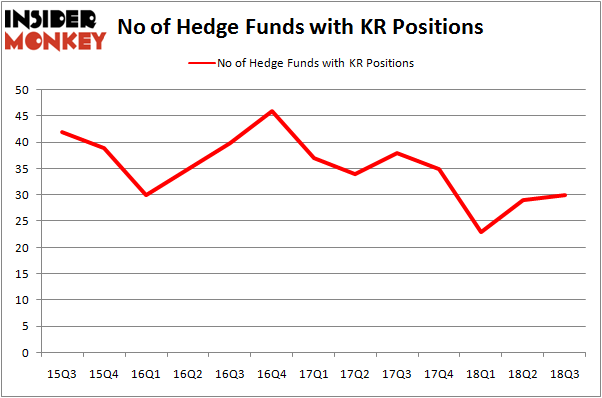 Among these funds, Citadel Investment Group held the most valuable stake in The Kroger Co. (NYSE:KR), which was worth $35.9 million at the end of the third quarter. On the second spot was Brigade Capital which amassed $29.1 million worth of shares. Moreover, Millennium Management, Gotham Asset Management, and Canyon Capital Advisors were also bullish on The Kroger Co. (NYSE:KR), allocating a large percentage of their portfolios to this stock.

Consequently, specific money managers have been driving this bullishness. Maverick Capital, managed by Lee Ainslie, assembled the most valuable position in The Kroger Co. (NYSE:KR). Maverick Capital had $5.2 million invested in the company at the end of the quarter. Josh Donfeld and David Rogers’s Castle Hook Partners also made a $2.9 million investment in the stock during the quarter. The other funds with new positions in the stock are Gregory Thomas’s Carbonado Capital, Malcolm Fairbairn’s Ascend Capital, and Roger Ibbotson’s Zebra Capital Management.

Let’s check out hedge fund activity in other stocks – not necessarily in the same industry as The Kroger Co. (NYSE:KR) but similarly valued. We will take a look at Andeavor (NYSE:ANDV), Digital Realty Trust, Inc. (NYSE:DLR), Rockwell Automation Inc. (NYSE:ROK), and Rockwell Collins, Inc. (NYSE:COL). This group of stocks’ market valuations are closest to KR’s market valuation.

As you can see these stocks had an average of 37.5 hedge funds with bullish positions and the average amount invested in these stocks was $2.07 billion. That figure was $185 million in KR’s case. Rockwell Collins, Inc. (NYSE:COL) is the most popular stock in this table. On the other hand Rockwell Automation Inc. (NYSE:ROK) is the least popular one with only 28 bullish hedge fund positions. The Kroger Co. (NYSE:KR) is not the least popular stock in this group but hedge fund interest is still below average. This is a slightly negative signal and we’d rather spend our time researching stocks that hedge funds are piling on. In this regard COL might be a better candidate to consider a long position.