Most investors tend to think that hedge funds and other asset managers are worthless, as they cannot beat even simple index fund portfolios. In fact, most people expect hedge funds to compete with and outperform the bull market that we have witnessed in recent years. However, hedge funds are generally partially hedged and aim at delivering attractive risk-adjusted returns rather than following the ups and downs of equity markets hoping that they will outperform the broader market. Our research shows that certain hedge funds do have great stock picking skills (and we can identify these hedge funds in advance pretty accurately), so let’s take a glance at the smart money sentiment towards Texas Capital Bancshares Inc (NASDAQ:TCBI).

Texas Capital Bancshares Inc (NASDAQ:TCBI) was in 19 hedge funds’ portfolios at the end of the first quarter of 2019. TCBI has experienced a decrease in support from the world’s most elite money managers of late. There were 26 hedge funds in our database with TCBI positions at the end of the previous quarter. Our calculations also showed that tcbi isn’t among the 30 most popular stocks among hedge funds.

Heading into the second quarter of 2019, a total of 19 of the hedge funds tracked by Insider Monkey were bullish on this stock, a change of -27% from the previous quarter. Below, you can check out the change in hedge fund sentiment towards TCBI over the last 15 quarters. So, let’s examine which hedge funds were among the top holders of the stock and which hedge funds were making big moves. 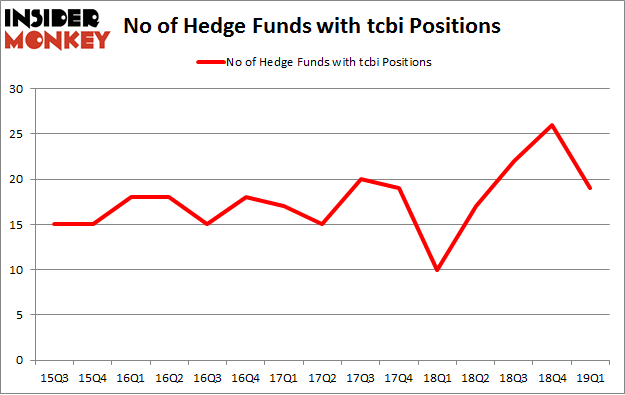 According to Insider Monkey’s hedge fund database, Citadel Investment Group, managed by Ken Griffin, holds the most valuable position in Texas Capital Bancshares Inc (NASDAQ:TCBI). Citadel Investment Group has a $45.8 million position in the stock, comprising less than 0.1%% of its 13F portfolio. On Citadel Investment Group’s heels is D E Shaw, managed by D. E. Shaw, which holds a $38.2 million position; the fund has less than 0.1%% of its 13F portfolio invested in the stock. Some other professional money managers that hold long positions include David E. Winebrenner’s Spindletop Capital, Jim Simons’s Renaissance Technologies and Ken Fisher’s Fisher Asset Management.

Due to the fact that Texas Capital Bancshares Inc (NASDAQ:TCBI) has experienced bearish sentiment from hedge fund managers, it’s safe to say that there exists a select few hedgies that decided to sell off their full holdings by the end of the third quarter. Intriguingly, Mariko Gordon’s Daruma Asset Management dropped the largest stake of the “upper crust” of funds tracked by Insider Monkey, valued at about $18.3 million in stock, and Jeffrey Hinkle’s Shoals Capital Management was right behind this move, as the fund dumped about $11.6 million worth. These bearish behaviors are intriguing to say the least, as aggregate hedge fund interest was cut by 7 funds by the end of the third quarter.

As you can see these stocks had an average of 15 hedge funds with bullish positions and the average amount invested in these stocks was $346 million. That figure was $203 million in TCBI’s case. Antero Resources Corp (NYSE:AR) is the most popular stock in this table. On the other hand TC Pipelines, LP (NYSE:TCP) is the least popular one with only 5 bullish hedge fund positions. Texas Capital Bancshares Inc (NASDAQ:TCBI) is not the most popular stock in this group but hedge fund interest is still above average. Our calculations showed that top 20 most popular stocks among hedge funds returned 1.9% in Q2 through May 30th and outperformed the S&P 500 ETF (SPY) by more than 3 percentage points. Hedge funds were also right about betting on TCBI as the stock returned 7.9% during the same period and outperformed the market by an even larger margin. Hedge funds were rewarded for their relative bullishness.