Here is What Hedge Funds Think About Tesaro Inc (TSRO)

Legendary investors such as Leon Cooperman and Seth Klarman earn enormous amounts of money for themselves and their investors by doing in-depth research on small-cap stocks that big brokerage houses don’t publish. Small cap stocks -especially when they are screened well- can generate substantial outperformance versus a boring index fund. That’s why we analyze the activity of those elite funds in these small-cap stocks. In the following paragraphs, we analyze Tesaro Inc (NASDAQ:TSRO) from the perspective of those elite funds.

Is Tesaro Inc (NASDAQ:TSRO) a healthy stock for your portfolio? The best stock pickers are taking a bearish view. The number of long hedge fund positions went down by 4 in recent months. Our calculations also showed that TSRO isn’t among the 30 most popular stocks among hedge funds. TSRO was in 20 hedge funds’ portfolios at the end of September. There were 24 hedge funds in our database with TSRO positions at the end of the previous quarter.

We’re going to take a look at the recent hedge fund action regarding Tesaro Inc (NASDAQ:TSRO).

What have hedge funds been doing with Tesaro Inc (NASDAQ:TSRO)?

At the end of the third quarter, a total of 20 of the hedge funds tracked by Insider Monkey were bullish on this stock, a change of -17% from one quarter earlier. By comparison, 34 hedge funds held shares or bullish call options in TSRO heading into this year. With the smart money’s capital changing hands, there exists a select group of noteworthy hedge fund managers who were upping their stakes meaningfully (or already accumulated large positions). 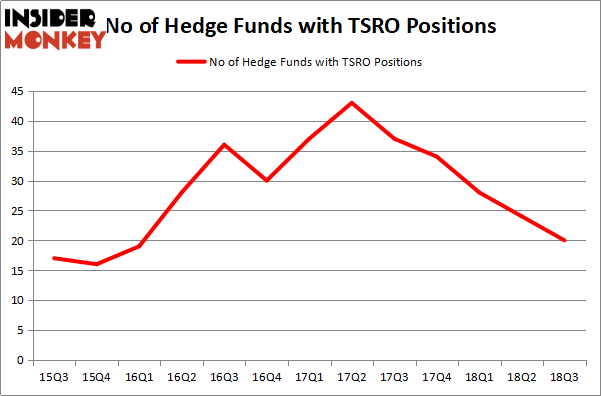 Because Tesaro Inc (NASDAQ:TSRO) has faced a decline in interest from hedge fund managers, logic holds that there is a sect of funds that elected to cut their full holdings by the end of the third quarter. It’s worth mentioning that Ori Hershkovitz’s Nexthera Capital dropped the biggest position of the 700 funds followed by Insider Monkey, totaling close to $19.3 million in stock, and Steve Cohen’s Point72 Asset Management was right behind this move, as the fund cut about $16 million worth. These bearish behaviors are important to note, as total hedge fund interest dropped by 4 funds by the end of the third quarter.

Let’s go over hedge fund activity in other stocks – not necessarily in the same industry as Tesaro Inc (NASDAQ:TSRO) but similarly valued. We will take a look at Varonis Systems Inc (NASDAQ:VRNS), Covanta Holding Corporation (NYSE:CVA), Medpace Holdings, Inc. (NASDAQ:MEDP), and Travelport Worldwide Ltd (NYSE:TVPT). All of these stocks’ market caps are similar to TSRO’s market cap.

As you can see these stocks had an average of 22.5 hedge funds with bullish positions and the average amount invested in these stocks was $200 million. That figure was $375 million in TSRO’s case. Medpace Holdings, Inc. (NASDAQ:MEDP) is the most popular stock in this table. On the other hand Covanta Holding Corporation (NYSE:CVA) is the least popular one with only 19 bullish hedge fund positions. Tesaro Inc (NASDAQ:TSRO) is not the least popular stock in this group but hedge fund interest is still below average. This is a slightly negative signal and we’d rather spend our time researching stocks that hedge funds are piling on. In this regard MEDP might be a better candidate to consider a long position.