Here is What Hedge Funds Think About Tejon Ranch

After several tireless days, we have finished crunching the numbers from the more than 700 13F filings issued by the elite hedge funds and other investment firms that we track at Insider Monkey, which disclosed those firms’ equity portfolios as of September 30. The results of that effort will be put on display in this article, as we share valuable insight into the smart money sentiment towards Tejon Ranch Company (NYSE:TRC).

Is Tejon Ranch an exceptional investment today? Investors who are in the know are in a bearish mood. The number of bullish hedge fund positions were trimmed by 2 recently. Our calculations also showed that TRC isn’t among the 30 most popular stocks among hedge funds.

While completing our research for this write-up, we came across Laughing Water Capital’s Quarterly Report that gave its opinion on the company, in which it has a position. We bring you a snippet of that letter:

“In the case of TRC, our assessment of value was tied to unique real estate, and we had hard evidence from the market that there was substantial demand for the stock at or near our purchase price as there was a rights offering that was oversubscribed by 100%.”

Our readers will be interested to know that Geoffrey L. Stack was responsible for the last major purchase of the company’s common stock. Stack purchased 5,555 shares at $18.00 in November 2017.  The company’s shares currently trade at $17.02.

At Q3’s end, a total of 10 of the hedge funds tracked by Insider Monkey were bullish on this stock, a change of -17% from one quarter earlier. On the other hand, there were a total of 10 hedge funds with a bullish position in TRC at the beginning of this year. With the smart money’s capital changing hands, there exists a few noteworthy hedge fund managers who were adding to their holdings significantly (or already accumulated large positions). 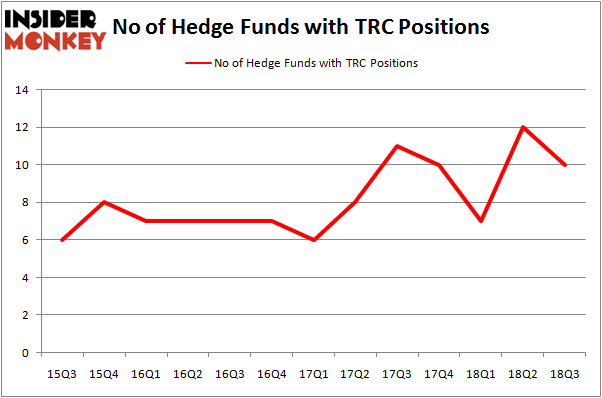 Among these funds, Royce & Associates held the most valuable stake in Tejon Ranch Company (NYSE:TRC), which was worth $35.5 million at the end of the third quarter. On the second spot was Third Avenue Management which amassed $27.8 million worth of shares. Moreover, GAMCO Investors, Ariel Investments, and MFP Investors were also bullish on Tejon Ranch Company (NYSE:TRC), allocating a large percentage of their portfolios to this stock.

Seeing as Tejon Ranch Company (NYSE:TRC) has faced a decline in interest from the aggregate hedge fund industry, it’s easy to see that there was a specific group of hedge funds who were dropping their entire stakes last quarter. Intriguingly, Israel Englander’s Millennium Management said goodbye to the biggest position of all the hedgies monitored by Insider Monkey, valued at about $1.5 million in stock, and John Overdeck and David Siegel’s Two Sigma Advisors was right behind this move, as the fund cut about $0.4 million worth. These transactions are important to note, as total hedge fund interest dropped by 2 funds last quarter.

As you can see these stocks had an average of 9 hedge funds with bullish positions and the average amount invested in these stocks was $33 million. That figure was $108 million in TRC’s case. Catchmark Timber Trust Inc (NYSE:CTT) is the most popular stock in this table. On the other hand First Community Bancshares Inc (NASDAQ:FCBC) is the least popular one with only 4 bullish hedge fund positions. Tejon Ranch Company (NYSE:TRC) is not the most popular stock in this group but hedge fund interest is still above average. This is a slightly positive signal but we’d rather spend our time researching stocks that hedge funds are piling on. In this regard CTT might be a better candidate to consider a long position.