Superior Energy Services, Inc. (NYSE:SPN) shareholders have witnessed a decrease in hedge fund sentiment lately. SPN was in 17 hedge funds’ portfolios at the end of the third quarter of 2018. There were 21 hedge funds in our database with SPN positions at the end of the previous quarter. Our calculations also showed that spn isn’t among the 30 most popular stocks among hedge funds.

How have hedgies been trading Superior Energy Services, Inc. (NYSE:SPN)?

Heading into the fourth quarter of 2018, a total of 17 of the hedge funds tracked by Insider Monkey were long this stock, a change of -19% from one quarter earlier. Below, you can check out the change in hedge fund sentiment towards SPN over the last 13 quarters. So, let’s see which hedge funds were among the top holders of the stock and which hedge funds were making big moves. 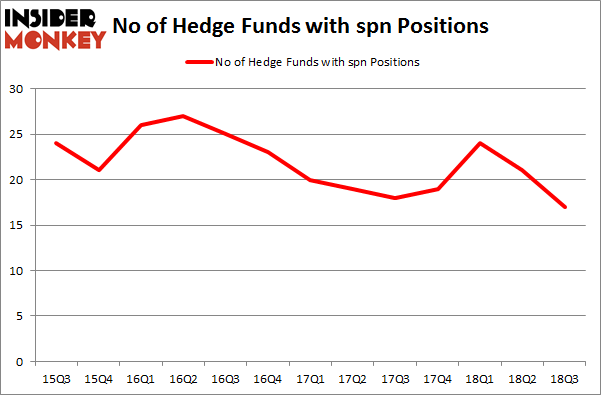 The largest stake in Superior Energy Services, Inc. (NYSE:SPN) was held by AQR Capital Management, which reported holding $41.4 million worth of stock at the end of September. It was followed by Millennium Management with a $30.6 million position. Other investors bullish on the company included Rima Senvest Management, Fine Capital Partners, and Pzena Investment Management.

Because Superior Energy Services, Inc. (NYSE:SPN) has experienced bearish sentiment from hedge fund managers, logic holds that there was a specific group of hedgies that elected to cut their positions entirely last quarter. At the top of the heap, Vince Maddi and Shawn Brennan’s SIR Capital Management said goodbye to the biggest position of all the hedgies followed by Insider Monkey, valued at close to $4.8 million in stock. Mariko Gordon’s fund, Daruma Asset Management, also sold off its stock, about $4.2 million worth. These bearish behaviors are interesting, as total hedge fund interest was cut by 4 funds last quarter.

As you can see these stocks had an average of 14 hedge funds with bullish positions and the average amount invested in these stocks was $189 million. That figure was $186 million in SPN’s case. WMIH Corp (NASDAQ:WMIH) is the most popular stock in this table. On the other hand Grupo Simec S.A.B. de C.V. (NYSE:SIM) is the least popular one with only 1 bullish hedge fund positions. Superior Energy Services, Inc. (NYSE:SPN) is not the most popular stock in this group but hedge fund interest is still above average. This is a slightly positive signal but we’d rather spend our time researching stocks that hedge funds are piling on. In this regard WMIH might be a better candidate to consider a long position.