Here is What Hedge Funds Think About Stamps.com Inc. (STMP)

A whopping number of 13F filings filed with U.S. Securities and Exchange Commission has been processed by Insider Monkey so that individual investors can look at the overall hedge fund sentiment towards the stocks included in their watchlists. These freshly-submitted public filings disclose money managers’ equity positions as of the end of the three-month period that ended March 31, so let’s proceed with the discussion of the hedge fund sentiment on Stamps.com Inc. (NASDAQ:STMP).

Is Stamps.com Inc. (NASDAQ:STMP) worth your attention right now? The best stock pickers are becoming less hopeful. The number of bullish hedge fund positions went down by 4 in recent months. Our calculations also showed that stmp isn’t among the 30 most popular stocks among hedge funds.

To the average investor there are many indicators stock traders put to use to analyze their holdings. Two of the best indicators are hedge fund and insider trading moves. Our experts have shown that, historically, those who follow the best picks of the elite investment managers can trounce the market by a superb amount (see the details here).

How have hedgies been trading Stamps.com Inc. (NASDAQ:STMP)?

At Q1’s end, a total of 29 of the hedge funds tracked by Insider Monkey held long positions in this stock, a change of -12% from the previous quarter. On the other hand, there were a total of 32 hedge funds with a bullish position in STMP a year ago. With hedge funds’ sentiment swirling, there exists a few notable hedge fund managers who were adding to their stakes substantially (or already accumulated large positions). 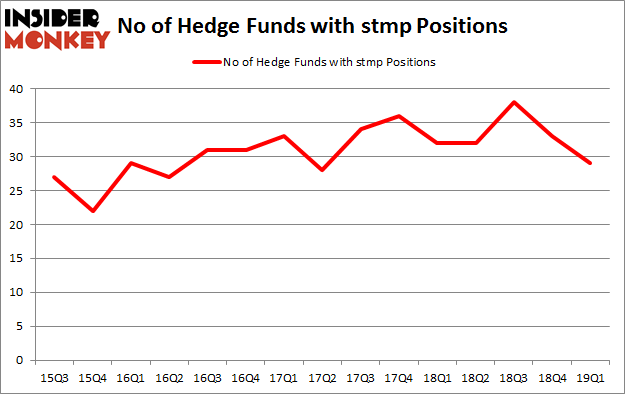 Among these funds, SQN Investors held the most valuable stake in Stamps.com Inc. (NASDAQ:STMP), which was worth $66.6 million at the end of the first quarter. On the second spot was Millennium Management which amassed $45.7 million worth of shares. Moreover, Ailanthus Capital Management, Tekne Capital Management, and Citadel Investment Group were also bullish on Stamps.com Inc. (NASDAQ:STMP), allocating a large percentage of their portfolios to this stock.

Seeing as Stamps.com Inc. (NASDAQ:STMP) has faced declining sentiment from the entirety of the hedge funds we track, it’s easy to see that there lies a certain “tier” of hedgies that slashed their full holdings by the end of the third quarter. At the top of the heap, Jim Simons’s Renaissance Technologies said goodbye to the biggest investment of the 700 funds tracked by Insider Monkey, totaling an estimated $43.6 million in stock, and Claus Moller’s P2 Capital Partners was right behind this move, as the fund dumped about $38.1 million worth. These bearish behaviors are intriguing to say the least, as aggregate hedge fund interest fell by 4 funds by the end of the third quarter.