The government requires hedge funds and wealthy investors with over a certain portfolio size to file a report that shows their positions at the end of every quarter. Even though it isn’t the intention, these filings level the playing field for ordinary investors. The latest round of 13F filings disclosed the funds’ positions on September 30. We at Insider Monkey have made an extensive database of more than 700 of those elite funds and prominent investors’ filings. In this article, we analyze how these elite funds and prominent investors traded SM Energy Company (NYSE:SM) based on those filings.

SM Energy was in 25 hedge funds’ portfolios at the end of September. SM has experienced an increase in hedge fund sentiment lately. There were 22 hedge funds in our database with SM positions at the end of the previous quarter. Our calculations also showed that SM isn’t among the 30 most popular stocks among hedge funds.

In the financial world, there are tons of indicators stock market investors put to use to appraise their stock investments. Some of the less known indicators are hedge fund and insider trading indicators. We have shown that, historically, those who follow the top picks of the best fund managers can outpace the market by a superb amount (see the details here).

Keeley Asset Management, which has a position in the company, offered its opinion on the company in its second quatrer letter to his shareholders. We bring you a highlight from the letter:

“SM Energy (NYSE: SM) (SM – $25.69 – NYSE) is a mid-sized oil and gas exploration and production company with most of its core operations in the Permian Basin in Texas. We believe that SM has more leverage than most E&P companies, and its capital plan is not quite as well funded. As a result, its share price tends to be more sensitive to changes in crude prices. The 14% rise in the price of crude combined with strong drilling results drove the shares higher in the second quarter.”

Readers will be interested to know that Javan D. Ottoson, President & CEO at the American petroleum and natural gas exploration company, was responsible for the last major insider purchase of the company’s common stock. The executive purchased 1,000 shares at $16.14 in June 2017. With the shares presently trading at $18.74, it was certainly a lucrative purchase.

How have hedgies been trading SM Energy Company (NYSE: SM)?

At the end of the third quarter, a total of 25 of the hedge funds tracked by Insider Monkey were bullish on this stock, a change of 14% from the second quarter of 2018. Below, you can check out the change in hedge fund sentiment towards SM over the last 13 quarters. With the smart money’s capital changing hands, there exists a select group of notable hedge fund managers who were boosting their stakes meaningfully (or already accumulated large positions). 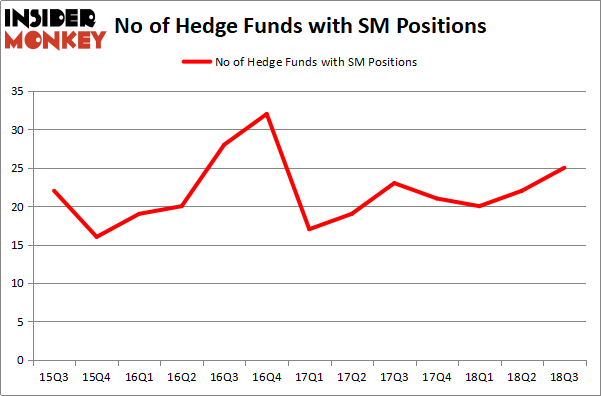 More specifically, Millennium Management was the largest shareholder of SM Energy Company (NYSE:SM), with a stake worth $197.5 million reported as of the end of September. Trailing Millennium Management was Citadel Investment Group, which amassed a stake valued at $133.9 million. Brenham Capital Management, D E Shaw, and First Pacific Advisors LLC were also very fond of the stock, giving the stock large weights in their portfolios.

As you can see these stocks had an average of 17.5 hedge funds with bullish positions and the average amount invested in these stocks was $240 million. That figure was $580 million in SM’s case. Nomad Foods Limited (NYSE:NOMD) is the most popular stock in this table. On the other hand AngloGold Ashanti Limited (NYSE:AU) is the least popular one with only 10 bullish hedge fund positions. SM Energy Company (NYSE:SM) is not the most popular stock in this group but hedge fund interest is still above average. This is a slightly positive signal but we’d rather spend our time researching stocks that hedge funds are piling on. In this regard NOMD might be a better candidate to consider a long position.