As we already know from media reports and hedge fund investor letters, many hedge funds lost money in fourth quarter, blaming macroeconomic conditions and unpredictable events that hit several sectors, with technology among them. Nevertheless, most investors decided to stick to their bullish theses and recouped their losses by the end of the first quarter. We get to see hedge funds’ thoughts towards the market and individual stocks by aggregating their quarterly portfolio movements and reading their investor letters. In this article, we will particularly take a look at what hedge funds think about Quotient Technology Inc (NYSE:QUOT).

Is Quotient Technology Inc (NYSE:QUOT) a worthy stock to buy now? Investors who are in the know are turning bullish. The number of long hedge fund bets improved by 4 recently. Our calculations also showed that QUOT isn’t among the 30 most popular stocks among hedge funds.

Heading into the second quarter of 2019, a total of 16 of the hedge funds tracked by Insider Monkey were bullish on this stock, a change of 33% from one quarter earlier. By comparison, 19 hedge funds held shares or bullish call options in QUOT a year ago. With the smart money’s positions undergoing their usual ebb and flow, there exists a few notable hedge fund managers who were upping their holdings significantly (or already accumulated large positions). 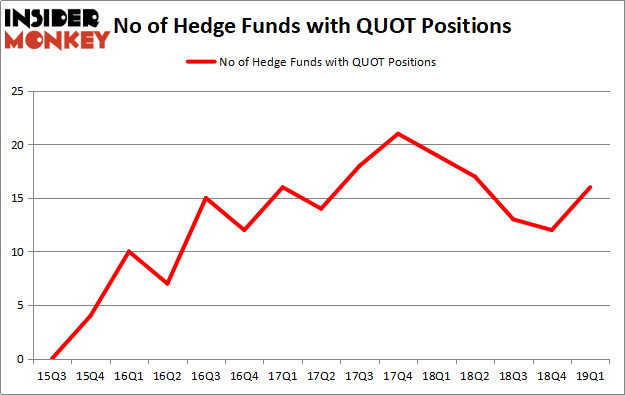 The largest stake in Quotient Technology Inc (NYSE:QUOT) was held by Perceptive Advisors, which reported holding $97.2 million worth of stock at the end of March. It was followed by Rima Senvest Management with a $66.5 million position. Other investors bullish on the company included P2 Capital Partners, D E Shaw, and Trigran Investments.

Now, specific money managers have jumped into Quotient Technology Inc (NYSE:QUOT) headfirst. Perceptive Advisors, managed by Joseph Edelman, initiated the largest position in Quotient Technology Inc (NYSE:QUOT). Perceptive Advisors had $97.2 million invested in the company at the end of the quarter. Douglas T. Granat’s Trigran Investments also made a $4.4 million investment in the stock during the quarter. The other funds with new positions in the stock are Jim Simons’s Renaissance Technologies, Joe DiMenna’s ZWEIG DIMENNA PARTNERS, and Joseph Mathias’s Concourse Capital Management.

As you can see these stocks had an average of 12.75 hedge funds with bullish positions and the average amount invested in these stocks was $111 million. That figure was $228 million in QUOT’s case. Sturm, Ruger & Company (NYSE:RGR) is the most popular stock in this table. On the other hand Genfit SA (NASDAQ:GNFT) is the least popular one with only 10 bullish hedge fund positions. Quotient Technology Inc (NYSE:QUOT) is not the most popular stock in this group but hedge fund interest is still above average. Our calculations showed that top 20 most popular stocks among hedge funds returned 6.2% in Q2 through June 19th and outperformed the S&P 500 ETF (SPY) by nearly 3 percentage points. Hedge funds were also right about betting on QUOT as the stock returned 12% during the same period and outperformed the market by an even larger margin. Hedge funds were rewarded for their relative bullishness.