Here is What Hedge Funds Think About PulteGroup, Inc. (PHM)

Is PulteGroup, Inc. (NYSE:PHM) a buy right now? Prominent investors are in an optimistic mood. The number of long hedge fund bets went up by 1 in recent months. Our calculations also showed that phm isn’t among the 30 most popular stocks among hedge funds. PHM was in 25 hedge funds’ portfolios at the end of March. There were 24 hedge funds in our database with PHM positions at the end of the previous quarter. 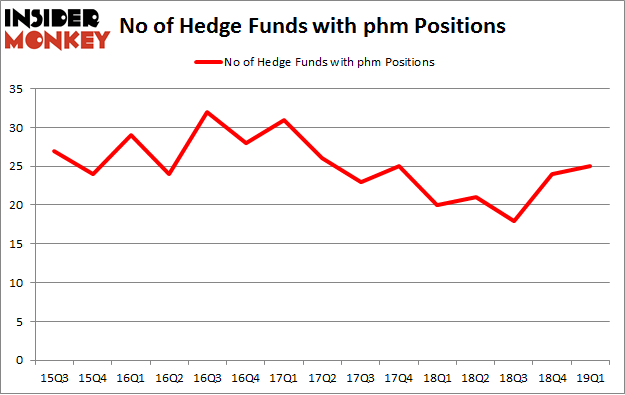 The largest stake in PulteGroup, Inc. (NYSE:PHM) was held by AQR Capital Management, which reported holding $207.3 million worth of stock at the end of March. It was followed by Greenhaven Associates with a $191.2 million position. Other investors bullish on the company included Arrowstreet Capital, Renaissance Technologies, and Millennium Management.

With a general bullishness amongst the heavyweights, specific money managers were breaking ground themselves. Arrowstreet Capital, managed by Peter Rathjens, Bruce Clarke and John Campbell, established the largest position in PulteGroup, Inc. (NYSE:PHM). Arrowstreet Capital had $103.1 million invested in the company at the end of the quarter. Robert Pohly’s Samlyn Capital also made a $11.4 million investment in the stock during the quarter. The other funds with brand new PHM positions are John Brandmeyer’s Cognios Capital, Jeffrey Talpins’s Element Capital Management, and Anand Parekh’s Alyeska Investment Group.

Let’s go over hedge fund activity in other stocks – not necessarily in the same industry as PulteGroup, Inc. (NYSE:PHM) but similarly valued. We will take a look at Hyatt Hotels Corporation (NYSE:H), Kilroy Realty Corp (NYSE:KRC), Pentair plc (NYSE:PNR), and RPM International Inc. (NYSE:RPM). This group of stocks’ market values are similar to PHM’s market value.

As you can see these stocks had an average of 21 hedge funds with bullish positions and the average amount invested in these stocks was $490 million. That figure was $740 million in PHM’s case. Pentair plc (NYSE:PNR) is the most popular stock in this table. On the other hand Kilroy Realty Corp (NYSE:KRC) is the least popular one with only 11 bullish hedge fund positions. PulteGroup, Inc. (NYSE:PHM) is not the most popular stock in this group but hedge fund interest is still above average. Our calculations showed that top 20 most popular stocks among hedge funds returned 1.9% in Q2 through May 30th and outperformed the S&P 500 ETF (SPY) by more than 3 percentage points. Hedge funds were also right about betting on PHM as the stock returned 12.8% during the same period and outperformed the market by an even larger margin. Hedge funds were rewarded for their relative bullishness.