Here is What Hedge Funds Think About Proofpoint Inc (PFPT)

The elite funds run by legendary investors such as Dan Loeb and David Tepper make hundreds of millions of dollars for themselves and their investors by spending enormous resources doing research on small cap stocks that big investment banks don’t follow. Because of their pay structures, they have strong incentive to do the research necessary to beat the market. That’s why we pay close attention to what they think in small cap stocks. In this article, we take a closer look at Proofpoint Inc (NASDAQ:PFPT) from the perspective of those elite funds.

Is Proofpoint Inc (NASDAQ:PFPT) ready to rally soon? Hedge funds are in a bearish mood. The number of bullish hedge fund positions retreated by 4 recently. Our calculations also showed that PFPT isn’t among the 30 most popular stocks among hedge funds. PFPT was in 25 hedge funds’ portfolios at the end of September. There were 29 hedge funds in our database with PFPT positions at the end of the previous quarter.

What does the smart money think about Proofpoint Inc (NASDAQ:PFPT)?

At the end of the third quarter, a total of 25 of the hedge funds tracked by Insider Monkey were bullish on this stock, a change of -14% from the second quarter of 2018. By comparison, 20 hedge funds held shares or bullish call options in PFPT heading into this year. With the smart money’s sentiment swirling, there exists an “upper tier” of noteworthy hedge fund managers who were increasing their stakes considerably (or already accumulated large positions). 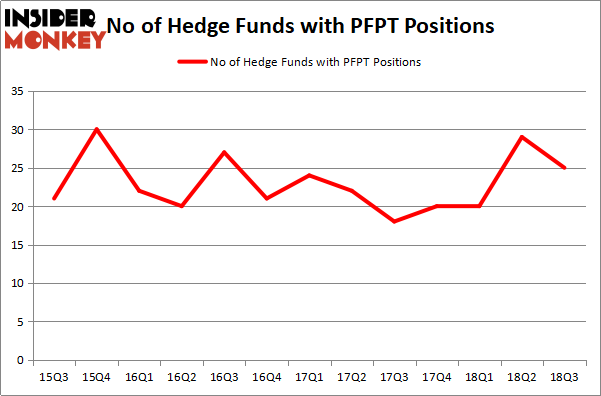 Among these funds, Alyeska Investment Group held the most valuable stake in Proofpoint Inc (NASDAQ:PFPT), which was worth $74.1 million at the end of the third quarter. On the second spot was Millennium Management, which amassed $64.2 million worth of shares. Moreover, Two Sigma Advisors, Balyasny Asset Management, and Citadel Investment Group were also bullish on Proofpoint Inc (NASDAQ:PFPT), allocating a large percentage of their portfolios to this stock.

Judging by the fact that Proofpoint Inc (NASDAQ:PFPT) has witnessed bearish sentiment from the entirety of the hedge funds we track, we can see that there exists a select few hedgies who sold off their entire stakes in the third quarter. It’s worth mentioning that Glenn Russell Dubin’s Highbridge Capital Management dumped the largest investment of all the hedgies watched by Insider Monkey, totaling an estimated $35.7 million in stock. Alex Sacerdote’s fund, Whale Rock Capital Management, also sold off its stock, about $30.1 million worth. These transactions are interesting, as aggregate hedge fund interest was cut by 4 funds in the third quarter.

As you can see these stocks had an average of 19.25 hedge funds with bullish positions and the average amount invested in these stocks was $290 million. That figure was $422 million in PFPT’s case. Webster Financial Corporation (NYSE:WBS) is the most popular stock in this table. On the other hand Medical Properties Trust, Inc. (NYSE:MPW) is the least popular one with only 10 bullish hedge fund positions. Proofpoint Inc (NASDAQ:PFPT) is not the most popular stock in this group but hedge fund interest is still above average. This is a slightly positive signal but we’d rather spend our time researching stocks that hedge funds are piling on. In this regard WBS might be a better candidate to consider a long position.

Hedge Funds Aren’t Crazy About FactSet Research Systems Inc. (NYSE:FDS...
Monthly Newsletter Strategy
Download a free copy of our newsletter and see the details inside!
Hedge Fund Resource Center
Related News
Here’s Why These Five Stocks Are Trending Do Hedge Funds Love Proofpoint Inc (PFPT)? Proofpoint Inc (PFPT), Cornerstone OnDemand, Inc. (CSOD) & Two Other Stocks: Was This Fund Right to Bet on Them? Reynolds American, Inc. (RAI), MGP Ingredients Inc (MGPI), and More: Here’s What Analysts Had To Say About These Stocks in the Spotlight Here’s Why Time Warner, Everyday Health, Proofpoint, and More Are On the Move Pandora, PayPal, Visa, and Other Stocks in Spotlight on Friday Hedge Funds Hated These Tech Stocks in Q1 The 10 Best Islands to Visit in 2019 5 Most Socially Responsible Companies in America 5 Ways You Can Eliminate Credit Card Debt
Billionaire Hedge Funds