Here is What Hedge Funds Think About Preferred Bank (PFBC)

Is Preferred Bank (NASDAQ:PFBC) a good equity to bet on right now? We like to check what the smart money thinks first before doing extensive research. Although there have been several high profile failed hedge fund picks, the consensus picks among hedge fund investors have historically outperformed the market after adjusting for known risk attributes. It’s not surprising given that hedge funds have access to better information and more resources to find the latest market-moving information.

Preferred Bank (NASDAQ:PFBC) has seen a decrease in support from the world’s most elite money managers of late. Our calculations also showed that pfbc isn’t among the 30 most popular stocks among hedge funds.

If you’d ask most traders, hedge funds are perceived as worthless, outdated investment tools of years past. While there are over 8,000 funds with their doors open at the moment, Our experts choose to focus on the masters of this group, approximately 700 funds. These hedge fund managers oversee most of all hedge funds’ total capital, and by keeping an eye on their highest performing stock picks, Insider Monkey has figured out a few investment strategies that have historically outperformed the broader indices. Insider Monkey’s flagship hedge fund strategy outperformed the S&P 500 index by 6 percentage points annually since its inception in May 2014 through early November 2018. We were able to generate large returns even by identifying short candidates. Our portfolio of short stocks lost 24% since February 2017 (through December 3rd) even though the market was up nearly 23% during the same period. We just shared a list of 11 short targets in our latest quarterly update. 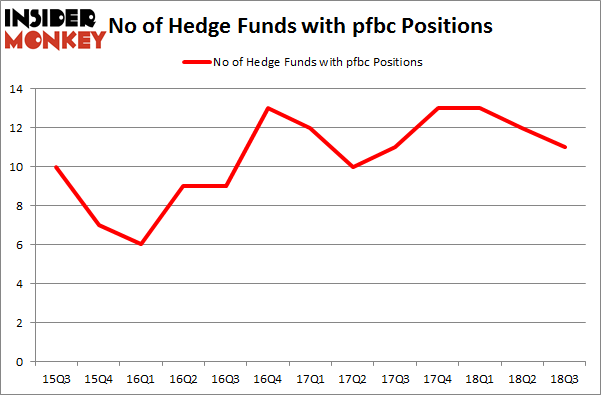 More specifically, Renaissance Technologies was the largest shareholder of Preferred Bank (NASDAQ:PFBC), with a stake worth $17.1 million reported as of the end of September. Trailing Renaissance Technologies was Millennium Management, which amassed a stake valued at $11.1 million. Basswood Capital, Marshall Wace LLP, and Portolan Capital Management were also very fond of the stock, giving the stock large weights in their portfolios.

Seeing as Preferred Bank (NASDAQ:PFBC) has witnessed falling interest from the smart money, logic holds that there was a specific group of funds that slashed their full holdings in the third quarter. Intriguingly, Richard Driehaus’s Driehaus Capital cut the biggest stake of the “upper crust” of funds monitored by Insider Monkey, comprising close to $9.9 million in stock, and Principal Global Investors’s Columbus Circle Investors was right behind this move, as the fund dropped about $5 million worth. These transactions are interesting, as aggregate hedge fund interest dropped by 1 funds in the third quarter.

As you can see these stocks had an average of 14 hedge funds with bullish positions and the average amount invested in these stocks was $66 million. That figure was $54 million in PFBC’s case. Perficient, Inc. (NASDAQ:PRFT) is the most popular stock in this table. On the other hand Hersha Hospitality Trust (NYSE:HT) is the least popular one with only 8 bullish hedge fund positions. Preferred Bank (NASDAQ:PFBC) is not the least popular stock in this group but hedge fund interest is still below average. This is a slightly negative signal and we’d rather spend our time researching stocks that hedge funds are piling on. In this regard PRFT might be a better candidate to consider a long position.