Here is What Hedge Funds Think About PacWest Bancorp (PACW)

Hedge funds are not perfect. They have their bad picks just like everyone else. Facebook, a stock hedge funds have loved dearly, lost nearly 40% of its value at one point in 2018. Although hedge funds are not perfect, their consensus picks do deliver solid returns, however. Our data show the top 20 S&P 500 stocks among hedge funds beat the S&P 500 Index by more than 6 percentage points so far in 2019. Because hedge funds have a lot of resources and their consensus picks do well, we pay attention to what they think. In this article, we analyze what the elite funds think of PacWest Bancorp (NASDAQ:PACW).

PacWest Bancorp (NASDAQ:PACW) shares haven’t seen a lot of action during the first quarter. Overall, hedge fund sentiment was unchanged. The stock was in 21 hedge funds’ portfolios at the end of March. At the end of this article we will also compare PACW to other stocks including Axis Capital Holdings Limited (NYSE:AXS), Shell Midstream Partners LP (NYSE:SHLX), and MSC Industrial Direct Co Inc (NYSE:MSM) to get a better sense of its popularity.

According to most investors, hedge funds are seen as worthless, outdated investment tools of years past. While there are more than 8000 funds trading today, We choose to focus on the moguls of this group, around 750 funds. These investment experts have their hands on most of the smart money’s total capital, and by shadowing their highest performing equity investments, Insider Monkey has unearthed numerous investment strategies that have historically exceeded Mr. Market. Insider Monkey’s flagship hedge fund strategy exceeded the S&P 500 index by around 5 percentage points per year since its inception in May 2014 through the end of May. We were able to generate large returns even by identifying short candidates. Our portfolio of short stocks lost 30.9% since February 2017 (through May 30th) even though the market was up nearly 24% during the same period. We just shared a list of 5 short targets in our latest quarterly update and they are already down an average of 11.9% in less than a couple of weeks whereas our long picks outperformed the market by 2 percentage points in this volatile 2 week period. 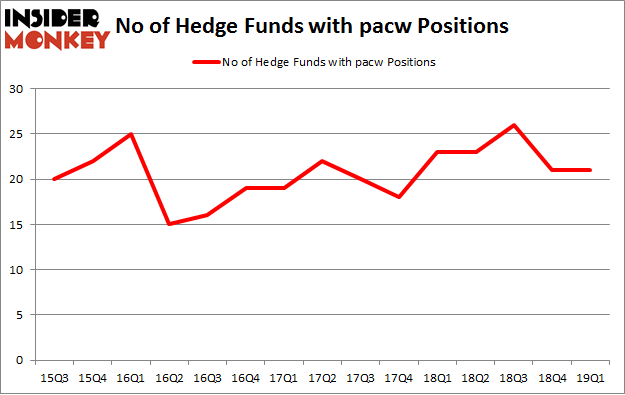 More specifically, Cardinal Capital was the largest shareholder of PacWest Bancorp (NASDAQ:PACW), with a stake worth $119 million reported as of the end of March. Trailing Cardinal Capital was Fisher Asset Management, which amassed a stake valued at $28.2 million. Basswood Capital, Marshall Wace LLP, and Millennium Management were also very fond of the stock, giving the stock large weights in their portfolios.

Due to the fact that PacWest Bancorp (NASDAQ:PACW) has experienced bearish sentiment from the entirety of the hedge funds we track, it’s safe to say that there was a specific group of hedge funds who were dropping their positions entirely by the end of the third quarter. Intriguingly, Paul Magidson, Jonathan Cohen. And Ostrom Enders’s Castine Capital Management sold off the largest investment of the “upper crust” of funds followed by Insider Monkey, totaling close to $5 million in stock. John Overdeck and David Siegel’s fund, Two Sigma Advisors, also sold off its stock, about $2.3 million worth. These transactions are interesting, as total hedge fund interest stayed the same (this is a bearish signal in our experience).

As you can see these stocks had an average of 19.25 hedge funds with bullish positions and the average amount invested in these stocks was $299 million. That figure was $238 million in PACW’s case. Axis Capital Holdings Limited (NYSE:AXS) is the most popular stock in this table. On the other hand Shell Midstream Partners LP (NYSE:SHLX) is the least popular one with only 7 bullish hedge fund positions. PacWest Bancorp (NASDAQ:PACW) is not the most popular stock in this group but hedge fund interest is still above average. Our calculations showed that top 20 most popular stocks among hedge funds returned 1.9% in Q2 through May 30th and outperformed the S&P 500 ETF (SPY) by more than 3 percentage points. Hedge funds were also right about betting on PACW, though not to the same extent, as the stock returned -0.1% during the same time frame and outperformed the market as well.