Here is What Hedge Funds Think About Novartis AG (NVS)

The elite funds run by legendary investors such as Dan Loeb and David Tepper make hundreds of millions of dollars for themselves and their investors by spending enormous resources doing research on small cap stocks that big investment banks don’t follow. Because of their pay structures, they have strong incentive to do the research necessary to beat the market. That’s why we pay close attention to what they think in small cap stocks. In this article, we take a closer look at Novartis AG (NYSE:NVS) from the perspective of those elite funds.

Novartis AG (NYSE:NVS) was in 29 hedge funds’ portfolios at the end of the third quarter of 2018. NVS investors should pay attention to an increase in support from the world’s most elite money managers recently. There were 25 hedge funds in our database with NVS positions at the end of the previous quarter. Our calculations also showed that NVS isn’t among the 30 most popular stocks among hedge funds.

What does the smart money think about Novartis AG (NYSE:NVS)?

At Q3’s end, a total of 29 of the hedge funds tracked by Insider Monkey were bullish on this stock, a change of 16% from the previous quarter. The graph below displays the number of hedge funds with bullish position in NVS over the last 13 quarters. With hedgies’ capital changing hands, there exists an “upper tier” of key hedge fund managers who were boosting their stakes substantially (or already accumulated large positions). 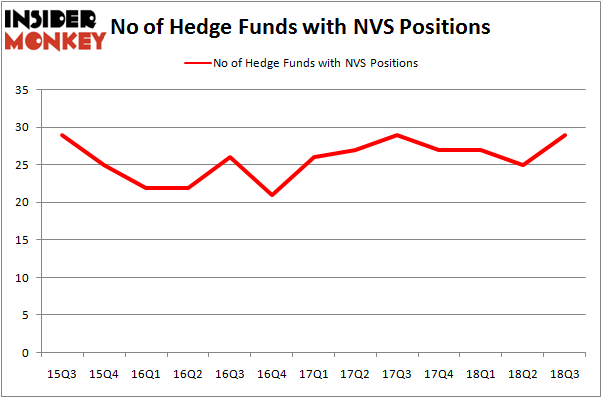 The largest stake in Novartis AG (NYSE:NVS) was held by Fisher Asset Management, which reported holding $639.7 million worth of stock at the end of September. It was followed by Arrowstreet Capital with a $267.6 million position. Other investors bullish on the company included Renaissance Technologies, Millennium Management, and Point72 Asset Management.

With a general bullishness amongst the heavyweights, key hedge funds have been driving this bullishness. Point72 Asset Management, managed by Steve Cohen, assembled the largest position in Novartis AG (NYSE:NVS). Point72 Asset Management had $87.7 million invested in the company at the end of the quarter. Anand Parekh’s Alyeska Investment Group also made a $67.7 million investment in the stock during the quarter. The other funds with new positions in the stock are Mike Vranos’s Ellington, Nick Thakore’s Diametric Capital, and Benjamin A. Smith’s Laurion Capital Management.

As you can see these stocks had an average of 41 hedge funds with bullish positions and the average amount invested in these stocks was $8.52 billion. That figure was $1.73 billion in NVS’s case. Merck & Co., Inc. (NYSE:MRK) is the most popular stock in this table. On the other hand Toyota Motor Corporation (NYSE:TM) is the least popular one with only 9 bullish hedge fund positions. Novartis AG (NYSE:NVS) is not the least popular stock in this group but hedge fund interest is still below average. This is a slightly negative signal and we’d rather spend our time researching stocks that hedge funds are piling on. In this regard MRK might be a better candidate to consider a long position.