Is Newpark Resources Inc (NYSE:NR) a buy here? Investors who are in the know are becoming less confident. The number of bullish hedge fund bets shrunk by 2 in recent months. Our calculations also showed that nr isn’t among the 30 most popular stocks among hedge funds. NR was in 14 hedge funds’ portfolios at the end of September. There were 16 hedge funds in our database with NR positions at the end of the previous quarter.

To most shareholders, hedge funds are seen as slow, outdated investment tools of years past. While there are greater than 8,000 funds in operation at present, Our researchers choose to focus on the leaders of this club, approximately 700 funds. These investment experts shepherd the lion’s share of all hedge funds’ total asset base, and by shadowing their highest performing stock picks, Insider Monkey has determined numerous investment strategies that have historically beaten the market. Insider Monkey’s flagship hedge fund strategy outperformed the S&P 500 index by 6 percentage points per annum since its inception in May 2014 through early November 2018. We were able to generate large returns even by identifying short candidates. Our portfolio of short stocks lost 24% since February 2017 (through December 3rd) even though the market was up nearly 23% during the same period. We just shared a list of 11 short targets in our latest quarterly update.

How have hedgies been trading Newpark Resources Inc (NYSE:NR)?

Heading into the fourth quarter of 2018, a total of 14 of the hedge funds tracked by Insider Monkey held long positions in this stock, a change of -13% from one quarter earlier. Below, you can check out the change in hedge fund sentiment towards NR over the last 13 quarters. So, let’s see which hedge funds were among the top holders of the stock and which hedge funds were making big moves. 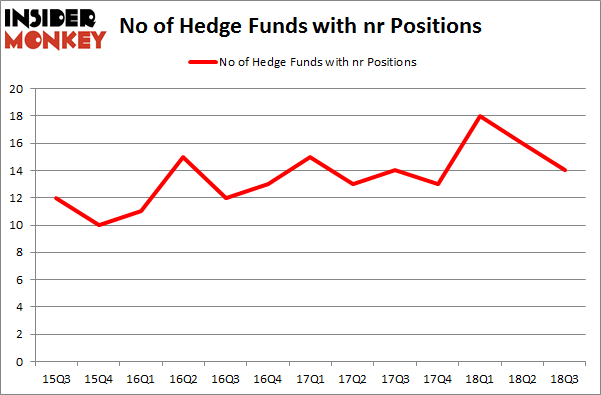 According to publicly available hedge fund and institutional investor holdings data compiled by Insider Monkey, Chuck Royce’s Royce & Associates has the largest position in Newpark Resources Inc (NYSE:NR), worth close to $30 million, corresponding to 0.2% of its total 13F portfolio. Coming in second is Millennium Management, managed by Israel Englander, which holds a $9.6 million position; less than 0.1%% of its 13F portfolio is allocated to the stock. Some other members of the smart money that hold long positions include Jim Simons’s Renaissance Technologies, Ken Griffin’s Citadel Investment Group and Paul Marshall and Ian Wace’s Marshall Wace LLP.

Since Newpark Resources Inc (NYSE:NR) has experienced declining sentiment from the entirety of the hedge funds we track, it’s safe to say that there exists a select few hedge funds that slashed their positions entirely by the end of the third quarter. Intriguingly, Mariko Gordon’s Daruma Asset Management sold off the biggest investment of the “upper crust” of funds monitored by Insider Monkey, comprising an estimated $19.7 million in stock. Richard Driehaus’s fund, Driehaus Capital, also cut its stock, about $2.6 million worth. These bearish behaviors are important to note, as total hedge fund interest was cut by 2 funds by the end of the third quarter.

As you can see these stocks had an average of 13.5 hedge funds with bullish positions and the average amount invested in these stocks was $109 million. That figure was $56 million in NR’s case. Acorda Therapeutics Inc (NASDAQ:ACOR) is the most popular stock in this table. On the other hand Tuniu Corporation (NASDAQ:TOUR) is the least popular one with only 3 bullish hedge fund positions. Newpark Resources Inc (NYSE:NR) is not the most popular stock in this group but hedge fund interest is still above average. This is a slightly positive signal but we’d rather spend our time researching stocks that hedge funds are piling on. In this regard ACOR might be a better candidate to consider a long position.