How do you pick the next stock to invest in? One way would be to spend hours of research browsing through thousands of publicly traded companies. However, an easier way is to look at the stocks that smart money investors are collectively bullish on. Hedge funds and other institutional investors usually invest large amounts of capital and have to conduct due diligence while choosing their next pick. They don’t always get it right, but, on average, their stock picks historically generated strong returns after adjusting for known risk factors. With this in mind, let’s take a look at the recent hedge fund activity surrounding Manulife Financial Corporation (NYSE:MFC).

Manulife Financial Corporation (NYSE:MFC) investors should pay attention to an increase in hedge fund sentiment of late. Our calculations also showed that MFC isn’t among the 30 most popular stocks among hedge funds.

What does the smart money think about Manulife Financial Corporation (NYSE:MFC)?

At Q3’s end, a total of 21 of the hedge funds tracked by Insider Monkey held long positions in this stock, a change of 31% from the second quarter of 2018. By comparison, 17 hedge funds held shares or bullish call options in MFC heading into this year. With hedgies’ sentiment swirling, there exists a few noteworthy hedge fund managers who were upping their stakes significantly (or already accumulated large positions). 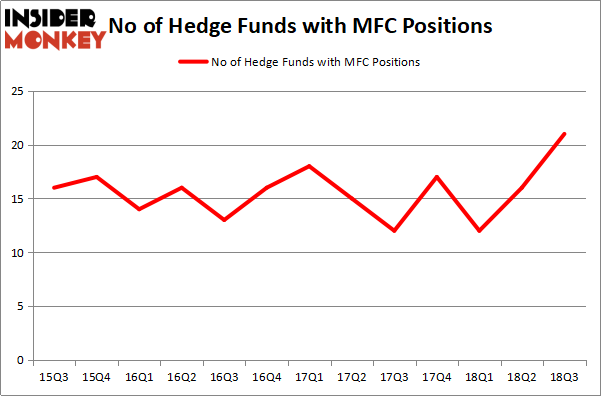 More specifically, AQR Capital Management was the largest shareholder of Manulife Financial Corporation (NYSE:MFC), with a stake worth $97.7 million reported as of the end of September. Trailing AQR Capital Management was Citadel Investment Group, which amassed a stake valued at $69.2 million. Arrowstreet Capital, Two Sigma Advisors, and Renaissance Technologies were also very fond of the stock, giving the stock large weights in their portfolios.

As industrywide interest jumped, some big names have been driving this bullishness. BlueCrest Capital Mgmt., managed by Michael Platt and William Reeves, initiated the largest position in Manulife Financial Corporation (NYSE:MFC). BlueCrest Capital Mgmt. had $2.1 million invested in the company at the end of the quarter. Jeffrey Talpins’s Element Capital Management also made a $1.3 million investment in the stock during the quarter. The other funds with new positions in the stock are Matthew Tewksbury’s Stevens Capital Management, Paul Marshall and Ian Wace’s Marshall Wace LLP, and Alec Litowitz and Ross Laser’s Magnetar Capital.

As you can see these stocks had an average of 24.25 hedge funds with bullish positions and the average amount invested in these stocks was $748 million. That figure was $389 million in MFC’s case. American Electric Power Company, Inc. (NYSE:AEP) is the most popular stock in this table. On the other hand National Grid plc (NYSE:NGG) is the least popular one with only 11 bullish hedge fund positions. Manulife Financial Corporation (NYSE:MFC) is not the least popular stock in this group but hedge fund interest is still below average. This is a slightly negative signal and we’d rather spend our time researching stocks that hedge funds are piling on. In this regard AEP might be a better candidate to consider a long position.