The Insider Monkey team has completed processing the quarterly 13F filings for the September quarter submitted by the hedge funds and other money managers included in our extensive database. Most hedge fund investors endured a torrid quarter, which certainly propelled them to adjust their equity holdings so as to maintain the desired risk profile. As a result, the relevancy of these public filings and their content is indisputable, as they may reveal numerous high-potential stocks. The following article will discuss the smart money sentiment towards Lincoln Electric Holdings, Inc. (NASDAQ:LECO).

Hedge fund interest in Lincoln Electric Holdings, Inc. (NASDAQ:LECO) shares was flat at the end of last quarter. This is usually a negative indicator. The level and the change in hedge fund popularity aren’t the only variables you need to analyze to decipher hedge funds’ perspectives. A stock may witness a boost in popularity but it may still be less popular than similarly priced stocks. That’s why at the end of this article we will examine companies such as YPF Sociedad Anonima (NYSE:YPF), Integrated Device Technology, Inc. (NASDAQ:IDTI), and JetBlue Airways Corporation (NASDAQ:JBLU) to gather more data points.

At Q3’s end, a total of 19 of the hedge funds tracked by Insider Monkey were bullish on this stock, representing no change from the previous quarter. Below, you can check out the change in hedge fund sentiment towards LECO over the last 13 quarters. With hedge funds’ sentiment swirling, there exists a select group of notable hedge fund managers who were increasing their holdings substantially (or already accumulated large positions). 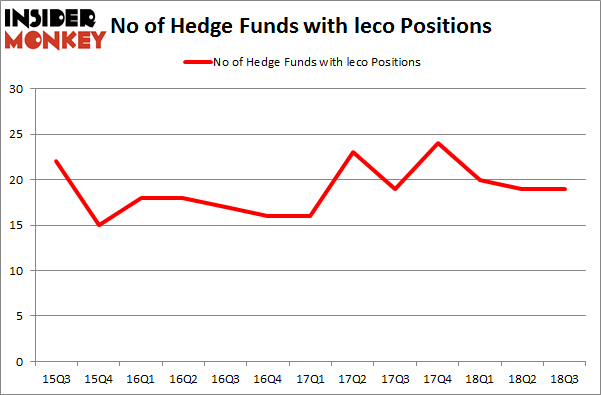 Seeing as Lincoln Electric Holdings, Inc. (NASDAQ:LECO) has experienced declining sentiment from the smart money, it’s easy to see that there was a specific group of money managers who sold off their full holdings heading into Q3. Interestingly, Phill Gross and Robert Atchinson’s Adage Capital Management dropped the largest investment of the “upper crust” of funds tracked by Insider Monkey, valued at close to $21.8 million in stock, and Peter Muller’s PDT Partners was right behind this move, as the fund said goodbye to about $11.3 million worth. These moves are interesting, as aggregate hedge fund interest stayed the same (this is a bearish signal in our experience).

As you can see these stocks had an average of 24.5 hedge funds with bullish positions and the average amount invested in these stocks was $439 million. That figure was $366 million in LECO’s case. Integrated Device Technology, Inc. (NASDAQ:IDTI) is the most popular stock in this table. On the other hand New Residential Investment Corp (NYSE:NRZ) is the least popular one with only 16 bullish hedge fund positions. Lincoln Electric Holdings, Inc. (NASDAQ:LECO) is not the least popular stock in this group but hedge fund interest is still below average. This is a slightly negative signal and we’d rather spend our time researching stocks that hedge funds are piling on. In this regard IDTI might be a better candidate to consider a long position.