Limelight Networks, Inc. (NASDAQ:LLNW) was in 17 hedge funds’ portfolios at the end of September. LLNW shareholders have witnessed a decrease in enthusiasm from smart money lately. There were 18 hedge funds in our database with LLNW positions at the end of the previous quarter. Our calculations also showed that llnw isn’t among the 30 most popular stocks among hedge funds.

What does the smart money think about Limelight Networks, Inc. (NASDAQ:LLNW)? 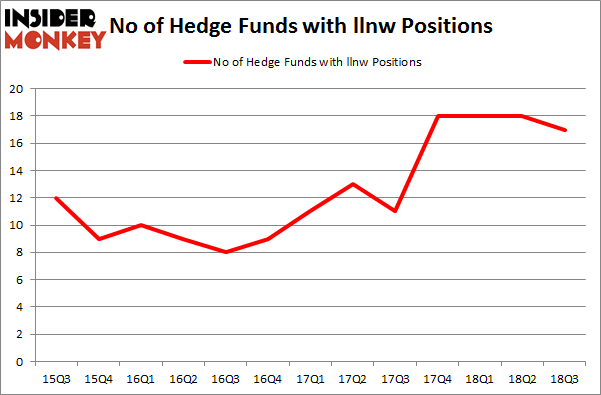 More specifically, Renaissance Technologies was the largest shareholder of Limelight Networks, Inc. (NASDAQ:LLNW), with a stake worth $13.7 million reported as of the end of September. Trailing Renaissance Technologies was Millennium Management, which amassed a stake valued at $6.2 million. Marshall Wace LLP, Two Sigma Advisors, and AQR Capital Management were also very fond of the stock, giving the stock large weights in their portfolios.

Judging by the fact that Limelight Networks, Inc. (NASDAQ:LLNW) has faced falling interest from the aggregate hedge fund industry, logic holds that there were a few hedge funds who sold off their entire stakes heading into Q3. Intriguingly, Peter Rathjens, Bruce Clarke and John Campbell’s Arrowstreet Capital said goodbye to the biggest stake of all the hedgies followed by Insider Monkey, comprising close to $4.5 million in stock, and Glenn Russell Dubin’s Highbridge Capital Management was right behind this move, as the fund dropped about $0.7 million worth. These transactions are intriguing to say the least, as total hedge fund interest dropped by 1 funds heading into Q3.

As you can see these stocks had an average of 8.5 hedge funds with bullish positions and the average amount invested in these stocks was $61 million. That figure was $44 million in LLNW’s case. On Deck Capital Inc (NYSE:ONDK) is the most popular stock in this table. On the other hand Putnam Premier Income Trust (NYSE:PPT) is the least popular one with only 1 bullish hedge fund positions. Limelight Networks, Inc. (NASDAQ:LLNW) is not the most popular stock in this group but hedge fund interest is still above average. This is a slightly positive signal but we’d rather spend our time researching stocks that hedge funds are piling on. In this regard ONDK might be a better candidate to consider a long position.