A market correction in the fourth quarter, spurred by a number of global macroeconomic concerns and rising interest rates ended up having a negative impact on the markets and many hedge funds as a result. The stocks of smaller companies were especially hard hit during this time as investors fled to investments seen as being safer. This is evident in the fact that the Russell 2000 ETF underperformed the S&P 500 ETF by 4 percentage points during the first half of the fourth quarter. We also received indications that hedge funds were trimming their positions amid the market volatility and uncertainty, and given their greater inclination towards smaller cap stocks than other investors, it follows that a stronger sell-off occurred in those stocks. Let’s study the hedge fund sentiment to see how those concerns affected their ownership of Liberty Property Trust (NYSE:LPT) during the quarter.

Liberty Property Trust (NYSE:LPT) investors should pay attention to a decrease in activity from the world’s largest hedge funds recently. Our calculations also showed that LPT isn’t among the 30 most popular stocks among hedge funds.

What have hedge funds been doing with Liberty Property Trust (NYSE:LPT)?

At Q3’s end, a total of 18 of the hedge funds tracked by Insider Monkey held long positions in this stock, a change of -14% from the second quarter of 2018. Below, you can check out the change in hedge fund sentiment towards LPT over the last 13 quarters. With hedgies’ positions undergoing their usual ebb and flow, there exists an “upper tier” of noteworthy hedge fund managers who were increasing their holdings considerably (or already accumulated large positions). 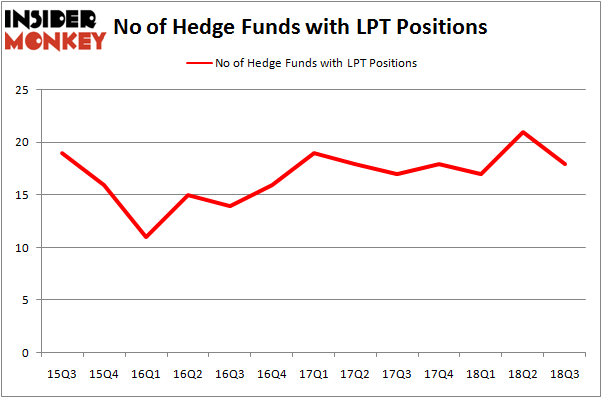 The largest stake in Liberty Property Trust (NYSE:LPT) was held by Land & Buildings Investment Management, which reported holding $84.7 million worth of stock at the end of September. It was followed by Citadel Investment Group with a $72.9 million position. Other investors bullish on the company included Balyasny Asset Management, Carlson Capital, and Echo Street Capital Management.

Because Liberty Property Trust (NYSE:LPT) has experienced declining sentiment from the entirety of the hedge funds we track, we can see that there lies a certain “tier” of money managers who were dropping their positions entirely by the end of the third quarter. Interestingly, Steve Cohen’s Point72 Asset Management dropped the biggest stake of the 700 funds followed by Insider Monkey, worth about $5.4 million in stock. David Rodriguez-Fraile’s fund, BlueMar Capital Management, also dropped its stock, about $2.5 million worth. These moves are intriguing to say the least, as total hedge fund interest was cut by 3 funds by the end of the third quarter.

As you can see these stocks had an average of 17 hedge funds with bullish positions and the average amount invested in these stocks was $311 million. That figure was $401 million in LPT’s case. Methanex Corporation (NASDAQ:MEOH) is the most popular stock in this table. On the other hand WABCO Holdings Inc. (NYSE:WBC) is the least popular one with only 15 bullish hedge fund positions. Liberty Property Trust (NYSE:LPT) is not the most popular stock in this group but hedge fund interest is still above average. This is a slightly positive signal but we’d rather spend our time researching stocks that hedge funds are piling on. In this regard MEOH might be a better candidate to consider a long position.

Should You Buy Murphy USA Inc. (MUSA)?
Monthly Newsletter Strategy
Download a free copy of our newsletter and see the details inside!
Hedge Fund Resource Center
Related News
Is Liberty Property Trust (LPT) A Good Stock To Buy? 11 Countries With The Worst Modern Music In The World The Top 5 Robo Advisor Apps of 2018 Five Reasons You Need a Day-Trading Mentor
Billionaire Hedge Funds