Here is What Hedge Funds Think About Kirby Corporation (KEX)

Kirby Corporation (NYSE:KEX) was in 20 hedge funds’ portfolios at the end of September. KEX shareholders have witnessed an increase in support from the world’s most successful money managers in recent months. There were 19 hedge funds in our database with KEX positions at the end of the previous quarter. The level and the change in hedge fund popularity aren’t the only variables you need to analyze to decipher hedge funds’ perspectives. A stock may witness a boost in popularity but it may still be less popular than similarly priced stocks. That’s why at the end of this article we will examine companies such as Seaboard Corporation (NYSEAMEX:SEB), AU Optronics Corp. (ADR) (NYSE:AUO), and Pitney Bowes Inc. (NYSE:PBI) to gather more data points.

At the end of the third quarter, a total of 20 of the hedge funds tracked by Insider Monkey were long this stock, a rise of 5% from the second quarter of 2016. By comparison, 29 hedge funds held shares or bullish call options in KEX heading into this year. With hedgies’ sentiment swirling, there exists a few noteworthy hedge fund managers who were upping their stakes considerably (or already accumulated large positions). 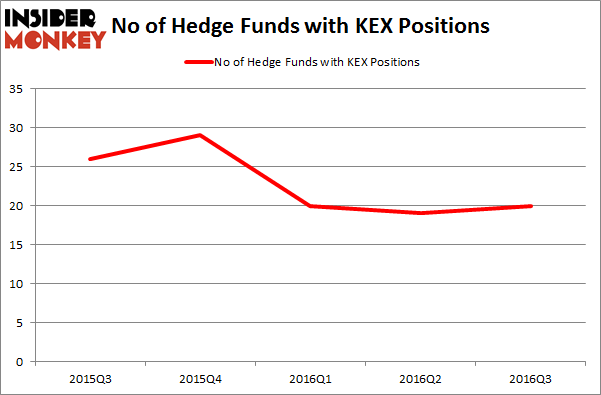 When looking at the institutional investors followed by Insider Monkey, Chuck Royce’s Royce & Associates has the biggest position in Kirby Corporation (NYSE:KEX), worth close to $89.1 million. Sitting at the No. 2 spot is Diamond Hill Capital, led by Ric Dillon, holding a $78.2 million position. Remaining peers that are bullish comprise Robert Joseph Caruso’s Select Equity Group, Paul Marshall and Ian Wace’s Marshall Wace LLP and Robert Pohly’s Samlyn Capital. We should note that none of these hedge funds are among our list of the 100 best performing hedge funds which is based on the performance of their 13F long positions in non-microcap stocks.