Hedge funds are known to underperform the bull markets but that’s not because they are bad at investing. Truth be told, most hedge fund managers and other smaller players within this industry are very smart and skilled investors. Of course, they may also make wrong bets in some instances, but no one knows what the future holds and how market participants will react to the bountiful news that floods in each day. Hedge funds underperform because they are hedged. The Standard and Poor’s 500 Index returned approximately 12.1% in the first 5 months of this year through May 30th (including dividend payments). Conversely, hedge funds’ top 20 large-cap stock picks generated a return of 18.7% during the same 5-month period. An average long/short hedge fund returned only a fraction of this due to the hedges they implement and the large fees they charge. Our research covering the last 18 years indicates that investors can outperform the market by imitating hedge funds’ stock picks rather than directly investing in hedge funds. That’s why we believe it isn’t a waste of time to check out hedge fund sentiment before you invest in a stock like Kinross Gold Corporation (NYSE:KGC).

Is Kinross Gold Corporation (NYSE:KGC) undervalued? Prominent investors are getting more optimistic. The number of long hedge fund bets inched up by 2 lately. Our calculations also showed that kgc isn’t among the 30 most popular stocks among hedge funds.

In the 21st century investor’s toolkit there are a lot of indicators stock traders have at their disposal to size up their stock investments. A duo of the most under-the-radar indicators are hedge fund and insider trading sentiment. We have shown that, historically, those who follow the top picks of the best hedge fund managers can outclass the broader indices by a superb amount (see the details here).

At Q1’s end, a total of 19 of the hedge funds tracked by Insider Monkey were long this stock, a change of 12% from the previous quarter. On the other hand, there were a total of 18 hedge funds with a bullish position in KGC a year ago. With the smart money’s positions undergoing their usual ebb and flow, there exists a few key hedge fund managers who were upping their stakes significantly (or already accumulated large positions). 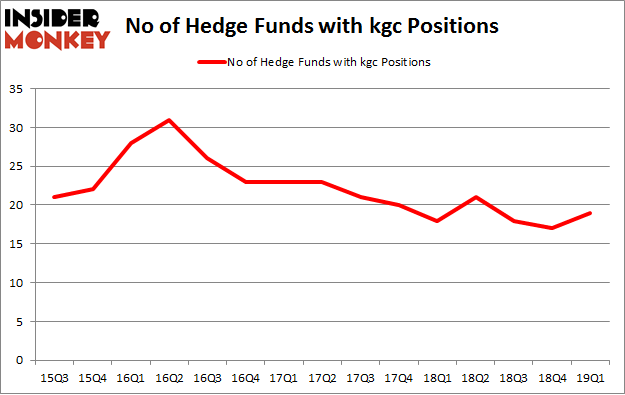 Of the funds tracked by Insider Monkey, Jim Simons’s Renaissance Technologies has the number one position in Kinross Gold Corporation (NYSE:KGC), worth close to $202 million, corresponding to 0.2% of its total 13F portfolio. The second most bullish fund manager is AQR Capital Management, led by Cliff Asness, holding a $58.9 million position; the fund has 0.1% of its 13F portfolio invested in the stock. Some other professional money managers that are bullish comprise Crispin Odey’s Odey Asset Management Group, John Overdeck and David Siegel’s Two Sigma Advisors and Israel Englander’s Millennium Management.

As one would reasonably expect, key money managers were leading the bulls’ herd. Sprott Asset Management, managed by Eric Sprott, assembled the most valuable position in Kinross Gold Corporation (NYSE:KGC). Sprott Asset Management had $2.2 million invested in the company at the end of the quarter. Kenneth Tropin’s Graham Capital Management also initiated a $0.5 million position during the quarter. The only other fund with a brand new KGC position is Michael Platt and William Reeves’s BlueCrest Capital Mgmt..

As you can see these stocks had an average of 25.5 hedge funds with bullish positions and the average amount invested in these stocks was $438 million. That figure was $319 million in KGC’s case. Lumentum Holdings Inc (NASDAQ:LITE) is the most popular stock in this table. On the other hand PS Business Parks Inc (NYSE:PSB) is the least popular one with only 12 bullish hedge fund positions. Kinross Gold Corporation (NYSE:KGC) is not the least popular stock in this group but hedge fund interest is still below average. This is a slightly negative signal and we’d rather spend our time researching stocks that hedge funds are piling on. Our calculations showed that top 20 most popular stocks among hedge funds returned 1.9% in Q2 through May 30th and outperformed the S&P 500 ETF (SPY) by more than 3 percentage points. Unfortunately KGC wasn’t nearly as popular as these 20 stocks (hedge fund sentiment was quite bearish); KGC investors were disappointed as the stock returned -7.3% during the same time period and underperformed the market. If you are interested in investing in large cap stocks with huge upside potential, you should check out the top 20 most popular stocks among hedge funds as 13 of these stocks already outperformed the market so far in Q2.