During the first half of the fourth quarter the Russell 2000 ETF (IWM) lagged the larger S&P 500 ETF (SPY) by about 4 percentage points as investors worried over the possible ramifications of rising interest rates. The hedge funds and institutional investors we track typically invest more in smaller-cap stocks than an average investor (i.e. only 298 S&P 500 constituents were among the 500 most popular stocks among hedge funds), and we have seen data that shows those funds paring back their overall exposure. Those funds cutting positions in small-caps is one reason why volatility has increased. In the following paragraphs, we take a closer look at what hedge funds and prominent investors think of Kennedy-Wilson Holdings Inc (NYSE:KW) and see how the stock is affected by the recent hedge fund activity.

In the 21st-century investor’s toolkit, there are several tools shareholders can use to appraise stocks. Some of the best tools are hedge fund and insider trading indicators. Our researchers have shown that, historically, those who follow the top picks of the top fund managers can outpace the S&P 500 by a very impressive margin (see the details here).

While collecting more data about Kennedy-Wilson Holdings Inc (NYSE:KW), we found Third Avenue Management’s Quarterly Report, in which, the fund shares its views on the company. Third Avenue Management divested its holding in the company in the fourth quarter of 2017, allocating the proceeds from exiting the security to the common stock of real estate related business Amerco. We bring you one part of the report:

“During the quarter, the Fund sold its position in the common stock of Kennedy Wilson Holdings (“Kennedy Wilson), a US-based real estate operating company that has a portfolio of “value-add commercial properties, as well as a sizable fund management business with more than $15 billion of third-party assets under management. The company recently completed an acquisition of its European affiliate, which changed the investment thesis.”

How have hedgies been trading Kennedy-Wilson Holdings Inc (NYSE:KW)?

Heading into the fourth quarter of 2018, a total of 12 of the hedge funds tracked by Insider Monkey held long positions in this stock, a change of 33% from the second quarter of 2018. On the other hand, there were a total of 23 hedge funds with a bullish position in KW at the beginning of this year. Due to this recent bearishness, the stock was not one of the 30 most popular stocks among hedge funds. 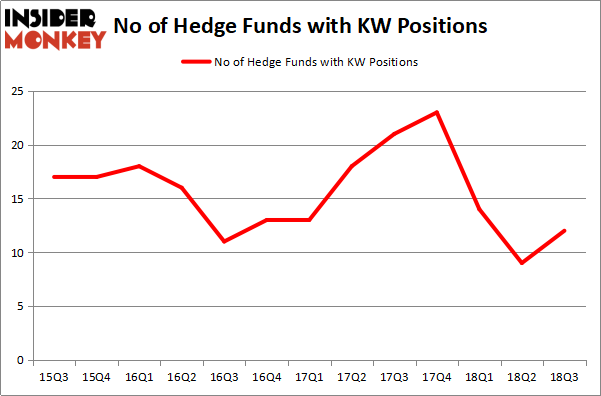 Among these funds, Fairfax Financial Holdings held the most valuable stake in Kennedy-Wilson Holdings Inc (NYSE:KW), which was worth $286.4 million at the end of the third quarter. On the second spot was Elkhorn Partners which amassed $94 million worth of shares. Moreover, Royce & Associates, Sprott Asset Management, and ACK Asset Management were also bullish on Kennedy-Wilson Holdings Inc (NYSE:KW), allocating a large percentage of their portfolios to this stock.

As aggregate interest increased, some big names were breaking ground themselves. Renaissance Technologies, managed by Jim Simons, established the largest position in Kennedy-Wilson Holdings Inc (NYSE:KW). Renaissance Technologies had $3.6 million invested in the company at the end of the quarter. Israel Englander’s Millennium Management also made a $1.1 million investment in the stock during the quarter. The other funds with new positions in the stock are Matthew Hulsizer’s PEAK6 Capital Management, Ken Griffin’s Citadel Investment Group, and Jeffrey Talpins’s Element Capital Management.

As you can see these stocks had an average of 22.75 hedge funds with bullish positions and the average amount invested in these stocks was $434 million. That figure was $462 million in KW’s case. Wright Medical Group N.V. (NASDAQ:WMGI) is the most popular stock in this table. On the other hand Valmont Industries, Inc. (NYSE:VMI) is the least popular one with only 17 bullish hedge fund positions. Compared to these stocks Kennedy-Wilson Holdings Inc (NYSE:KW) is even less popular than VMI. Considering that hedge funds aren’t fond of this stock in relation to other companies analyzed in this article, it may be a good idea to analyze it in detail and understand why the smart money isn’t behind this stock. This isn’t necessarily bad news. Although it is possible that hedge funds may think the stock is overpriced and view the stock as a short candidate, they may not be very familiar with the bullish thesis. In either case more research is warranted.