Here is What Hedge Funds Think About Invesco Ltd. (IVZ)

Invesco Ltd. (NYSE:IVZ) shares haven’t seen a lot of action during the first quarter. Overall, hedge fund sentiment was unchanged. The stock was in 24 hedge funds’ portfolios at the end of March. At the end of this article we will also compare IVZ to other stocks including Robert Half International Inc. (NYSE:RHI), PulteGroup, Inc. (NYSE:PHM), and Hyatt Hotels Corporation (NYSE:H) to get a better sense of its popularity. 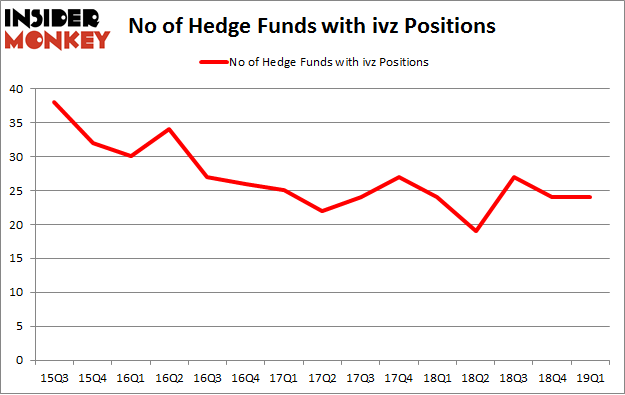 The largest stake in Invesco Ltd. (NYSE:IVZ) was held by Pzena Investment Management, which reported holding $51.1 million worth of stock at the end of March. It was followed by Select Equity Group with a $49.6 million position. Other investors bullish on the company included Arrowstreet Capital, Renaissance Technologies, and Two Sigma Advisors.

Since Invesco Ltd. (NYSE:IVZ) has faced falling interest from the entirety of the hedge funds we track, we can see that there exists a select few funds that slashed their full holdings heading into Q3. Interestingly, Ray Dalio’s Bridgewater Associates said goodbye to the biggest position of the 700 funds watched by Insider Monkey, comprising about $32.8 million in stock. Ravi Chopra’s fund, Azora Capital, also said goodbye to its stock, about $15.8 million worth. These bearish behaviors are intriguing to say the least, as aggregate hedge fund interest stayed the same (this is a bearish signal in our experience).

Let’s check out hedge fund activity in other stocks similar to Invesco Ltd. (NYSE:IVZ). We will take a look at Robert Half International Inc. (NYSE:RHI), PulteGroup, Inc. (NYSE:PHM), Hyatt Hotels Corporation (NYSE:H), and Kilroy Realty Corp (NYSE:KRC). All of these stocks’ market caps are closest to IVZ’s market cap.

As you can see these stocks had an average of 21.25 hedge funds with bullish positions and the average amount invested in these stocks was $571 million. That figure was $173 million in IVZ’s case. Robert Half International Inc. (NYSE:RHI) is the most popular stock in this table. On the other hand Kilroy Realty Corp (NYSE:KRC) is the least popular one with only 11 bullish hedge fund positions. Invesco Ltd. (NYSE:IVZ) is not the most popular stock in this group but hedge fund interest is still above average. Our calculations showed that top 20 most popular stocks among hedge funds returned 1.9% in Q2 through May 30th and outperformed the S&P 500 ETF (SPY) by more than 3 percentage points. Hedge funds were also right about betting on IVZ as the stock returned 7.1% during the same period and outperformed the market by an even larger margin. Hedge funds were rewarded for their relative bullishness.