Here is What Hedge Funds Think About Insulet Corporation (PODD)

The elite funds run by legendary investors such as Dan Loeb and David Tepper make hundreds of millions of dollars for themselves and their investors by spending enormous resources doing research on small cap stocks that big investment banks don’t follow. Because of their pay structures, they have strong incentive to do the research necessary to beat the market. That’s why we pay close attention to what they think in small cap stocks. In this article, we take a closer look at Insulet Corporation (NASDAQ:PODD) from the perspective of those elite funds.

Is Insulet Corporation (NASDAQ:PODD) a buy, sell, or hold? The best stock pickers are taking a bearish view. The number of long hedge fund bets decreased by 2 in recent months. Our calculations also showed that PODD isn’t among the 30 most popular stocks among hedge funds.

What does the smart money think about Insulet Corporation (NASDAQ:PODD)? 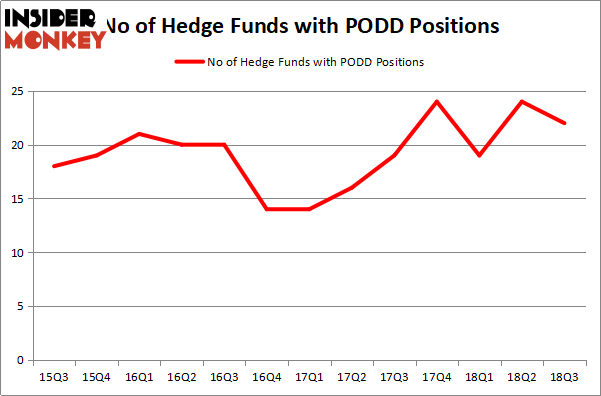 Among these funds, D E Shaw held the most valuable stake in Insulet Corporation (NASDAQ:PODD), which was worth $151 million at the end of the third quarter. On the second spot was Think Investments which amassed $56.6 million worth of shares. Moreover, Columbus Circle Investors, Citadel Investment Group, and Renaissance Technologies were also bullish on Insulet Corporation (NASDAQ:PODD), allocating a large percentage of their portfolios to this stock.

Because Insulet Corporation (NASDAQ:PODD) has faced bearish sentiment from the aggregate hedge fund industry, we can see that there exists a select few money managers who were dropping their entire stakes by the end of the third quarter. Intriguingly, Brian Ashford-Russell and Tim Woolley’s Polar Capital dumped the largest investment of the 700 funds monitored by Insider Monkey, comprising an estimated $17.1 million in stock. Peter Rathjens, Bruce Clarke and John Campbell’s fund, Arrowstreet Capital, also dropped its stock, about $7.7 million worth. These bearish behaviors are intriguing to say the least, as aggregate hedge fund interest was cut by 2 funds by the end of the third quarter.

As you can see these stocks had an average of 17.75 hedge funds with bullish positions and the average amount invested in these stocks was $374 million. That figure was $472 million in PODD’s case. Methanex Corporation (NASDAQ:MEOH) is the most popular stock in this table. On the other hand WABCO Holdings Inc. (NYSE:WBC) is the least popular one with only 15 bullish hedge fund positions. Compared to these stocks Insulet Corporation (NASDAQ:PODD) is more popular among hedge funds. Considering that hedge funds are fond of this stock in relation to its market cap peers, it may be a good idea to analyze it in detail and potentially include it in your portfolio.