We can judge whether Golar LNG Partners LP (NASDAQ:GMLP) is a good investment right now by following the lead of some of the best investors in the world and piggybacking their ideas. There’s no better way to get these firms’ immense resources and analytical capabilities working for us than to follow their lead into their best ideas. While not all of these picks will be winners, research shows that these picks historically outperformed the market when we factor in known risk factors.

Is Golar LNG Partners LP (NASDAQ:GMLP) a good investment now? Investors who are in the know are becoming more confident. The number of bullish hedge fund bets increased by 2 in recent months. Our calculations also showed that GMLP isn’t among the 30 most popular stocks among hedge funds. GMLP was in 6 hedge funds’ portfolios at the end of the third quarter of 2018. There were 4 hedge funds in our database with GMLP positions at the end of the previous quarter.

What have hedge funds been doing with Golar LNG Partners LP (NASDAQ:GMLP)?

Heading into the fourth quarter of 2018, a total of 6 of the hedge funds tracked by Insider Monkey were long this stock, a change of 50% from the previous quarter. The graph below displays the number of hedge funds with bullish position in GMLP over the last 13 quarters. With the smart money’s positions undergoing their usual ebb and flow, there exists a select group of noteworthy hedge fund managers who were upping their holdings meaningfully (or already accumulated large positions). 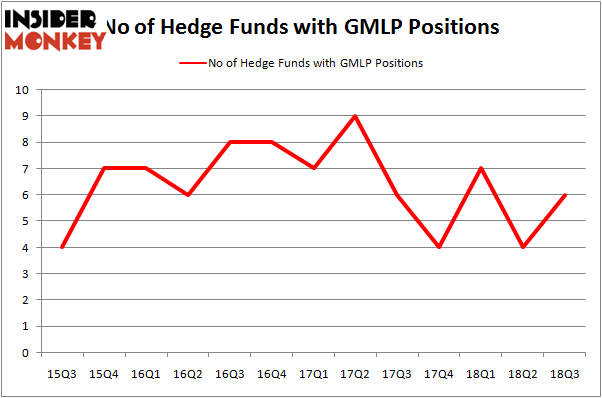 More specifically, Huber Capital Management was the largest shareholder of Golar LNG Partners LP (NASDAQ:GMLP), with a stake worth $28.7 million reported as of the end of September. Trailing Huber Capital Management was Renaissance Technologies, which amassed a stake valued at $2.9 million. Millennium Management, DSAM Partners, and Citadel Investment Group were also very fond of the stock, giving the stock large weights in their portfolios.

As aggregate interest increased, key hedge funds have been driving this bullishness. Millennium Management, managed by Israel Englander, created the biggest position in Golar LNG Partners LP (NASDAQ:GMLP). Millennium Management had $2.5 million invested in the company at the end of the quarter. Guy Shahar’s DSAM Partners also made a $2.1 million investment in the stock during the quarter. The only other fund with a new position in the stock is Matthew Hulsizer’s PEAK6 Capital Management.

As you can see these stocks had an average of 15 hedge funds with bullish positions and the average amount invested in these stocks was $139 million. That figure was $37 million in GMLP’s case. NCI Building Systems, Inc. (NYSE:NCS) is the most popular stock in this table. On the other hand Triumph Bancorp Inc (NASDAQ:TBK) is the least popular one with only 7 bullish hedge fund positions. Compared to these stocks Golar LNG Partners LP (NASDAQ:GMLP) is even less popular than TBK. Considering that hedge funds aren’t fond of this stock in relation to other companies analyzed in this article, it may be a good idea to analyze it in detail and understand why the smart money isn’t behind this stock. This isn’t necessarily bad news. Although it is possible that hedge funds may think the stock is overpriced and view the stock as a short candidate, they may not be very familiar with the bullish thesis. In either case more research is warranted.