Here is What Hedge Funds Think About Fortis Inc. (NYSE:FTS)

Before we spend days researching a stock idea we’d like to take a look at how hedge funds and billionaire investors recently traded that stock. S&P 500 Index ETF (SPY) lost 13.5% in the fourth quarter. Seven out of 11 industry groups in the S&P 500 Index were down more than 20% from their 52-week highs at the trough of the stock market crash. The average return of a randomly picked stock in the index was even worse. This means you (or a monkey throwing a dart) have less than an even chance of beating the market by randomly picking a stock. On the other hand, the top 15 most popular S&P 500 stocks among hedge funds not only recouped their Q4 losses but also outperformed the index by more than 3 percentage points. In this article, we will take a look at what hedge funds think about Fortis Inc. (NYSE:FTS).

Hedge fund interest in Fortis Inc. (NYSE:FTS) shares was flat at the end of last quarter. This is usually a negative indicator. The level and the change in hedge fund popularity aren’t the only variables you need to analyze to decipher hedge funds’ perspectives. A stock may witness a boost in popularity but it may still be less popular than similarly priced stocks. That’s why at the end of this article we will examine companies such as Mettler-Toledo International Inc. (NYSE:MTD), CenterPoint Energy, Inc. (NYSE:CNP), and Mylan N.V. (NASDAQ:MYL) to gather more data points.

What have hedge funds been doing with Fortis Inc. (NYSE:FTS)?

At the end of the fourth quarter, a total of 14 of the hedge funds tracked by Insider Monkey were long this stock, a change of 0% from the previous quarter. By comparison, 11 hedge funds held shares or bullish call options in FTS a year ago. With the smart money’s sentiment swirling, there exists a select group of noteworthy hedge fund managers who were adding to their stakes meaningfully (or already accumulated large positions). 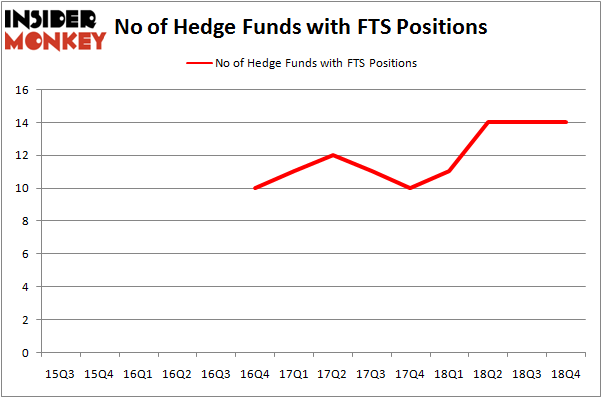 According to publicly available hedge fund and institutional investor holdings data compiled by Insider Monkey, Adage Capital Management, managed by Phill Gross and Robert Atchinson, holds the number one position in Fortis Inc. (NYSE:FTS). Adage Capital Management has a $60.1 million position in the stock, comprising 0.2% of its 13F portfolio. The second largest stake is held by Jim Simons of Renaissance Technologies, with a $55.8 million position; the fund has 0.1% of its 13F portfolio invested in the stock. Other members of the smart money that hold long positions include Ken Griffin’s Citadel Investment Group, Cliff Asness’s AQR Capital Management and Ric Dillon’s Diamond Hill Capital.

We view hedge fund activity in the stock unfavorable, but in this case there was only a single hedge fund selling its entire position: BlueCrest Capital Mgmt.. One hedge fund selling its entire position doesn’t always imply a bearish intent. Theoretically a hedge fund may decide to sell a promising position in order to invest the proceeds in a more promising idea. However, we don’t think this is the case in this case because only one of the 800+ hedge funds tracked by Insider Monkey identified as a viable investment and initiated a position in the stock (that fund was Arrowstreet Capital).

As you can see these stocks had an average of 31.5 hedge funds with bullish positions and the average amount invested in these stocks was $1088 million. That figure was $253 million in FTS’s case. Mylan N.V. (NASDAQ:MYL) is the most popular stock in this table. On the other hand Mettler-Toledo International Inc. (NYSE:MTD) is the least popular one with only 22 bullish hedge fund positions. Compared to these stocks Fortis Inc. (NYSE:FTS) is even less popular than MTD. Considering that hedge funds aren’t fond of this stock in relation to other companies analyzed in this article, it may be a good idea to analyze it in detail and understand why the smart money isn’t behind this stock. This isn’t necessarily bad news. Although it is possible that hedge funds may think the stock is overpriced and view the stock as a short candidate, they may not be very familiar with the bullish thesis. In either case more research is warranted.