The worries about the election and the ongoing uncertainty about the path of interest-rate increases have been keeping investors on the sidelines. Of course, most hedge funds and other asset managers have been underperforming main stock market indices since the middle of 2015. Interestingly though, smaller-cap stocks registered their best performance relative to the large-capitalization stocks since the end of the June quarter, suggesting that this may be the best time to take a cue from their stock picks. In fact, the Russell 2000 Index gained more than 15% since the beginning of the third quarter, while the Standard and Poor’s 500 benchmark returned less than 6%. This article will lay out and discuss the hedge fund and institutional investor sentiment towards FLIR Systems, Inc. (NASDAQ:FLIR).

Is FLIR Systems, Inc. (NASDAQ:FLIR) a healthy stock for your portfolio? Hedge funds are undeniably in an optimistic mood. The number of bullish hedge fund bets that are revealed through the 13F filings went up by 5 lately. The level and the change in hedge fund popularity aren’t the only variables you need to analyze to decipher hedge funds’ perspectives. A stock may witness a boost in popularity but it may still be less popular than similarly priced stocks. That’s why at the end of this article we will examine companies such as First American Financial Corp (NYSE:FAF), Boardwalk Pipeline Partners, LP (NYSE:BWP), and ICON plc – Ordinary Shares (NASDAQ:ICLR) to gather more data points.

At Q3’s end, a total of 22 of the hedge funds tracked by Insider Monkey held long positions in this stock, a 29% jump from one quarter earlier. Below, you can check out the change in hedge fund sentiment towards FLIR over the last 5 quarters, which shows a sharp decline in Q4 2015. So, let’s review which hedge funds were among the top holders of the stock and which hedge funds were making big moves. 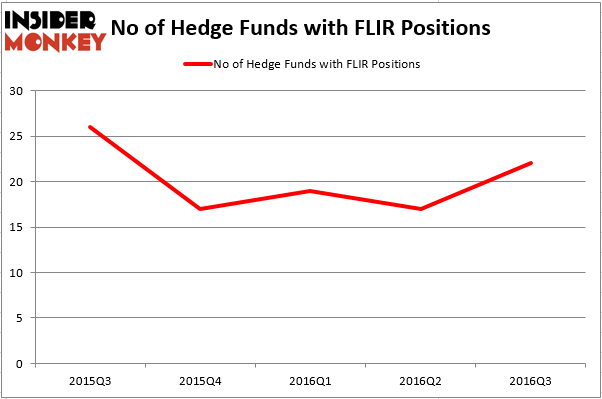 According to Insider Monkey’s hedge fund database, D E Shaw, founded by David E. Shaw, holds the number one position in FLIR Systems, Inc. (NASDAQ:FLIR). D E Shaw has a $50.7 million position in the stock. The second most bullish fund manager is Chuck Royce of Royce & Associates, with a $47.8 million position. Other members of the smart money with similar optimism include Wallace Weitz’s Wallace R. Weitz & Co., Jim Simons’ Renaissance Technologies, and Anand Parekh’s Alyeska Investment Group. We should note that none of these hedge funds are among our list of the 100 best performing hedge funds which is based on the performance of their 13F long positions in non-microcap stocks.