The Insider Monkey team has completed processing the quarterly 13F filings for the September quarter submitted by the hedge funds and other money managers included in our extensive database. Most hedge fund investors endured a torrid quarter, which certainly propelled them to adjust their equity holdings so as to maintain the desired risk profile. As a result, the relevancy of these public filings and their content is indisputable, as they may reveal numerous high-potential stocks. The following article will discuss the smart money sentiment towards Everest Re Group Ltd (NYSE:RE).

Is Everest Re Group Ltd (NYSE:RE) worth your attention right now? Prominent investors are in a bearish mood. The number of bullish hedge fund positions went down by 6 recently. Our calculations also showed that RE isn’t among the 30 most popular stocks among hedge funds. RE was in 14 hedge funds’ portfolios at the end of the third quarter of 2018. There were 20 hedge funds in our database with RE positions at the end of the previous quarter.

Let’s take a look at the new hedge fund action regarding Everest Re Group Ltd (NYSE:RE).

What does the smart money think about Everest Re Group Ltd (NYSE:RE)? 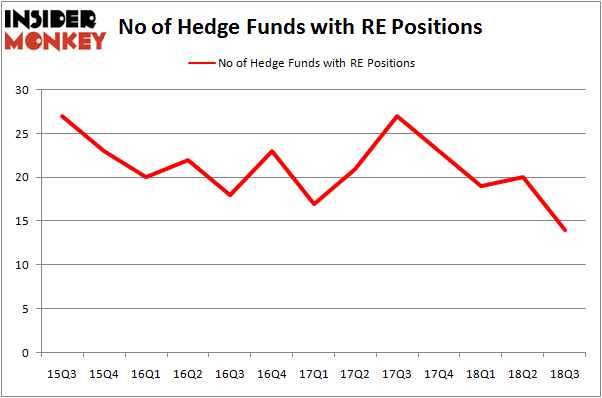 When looking at the institutional investors followed by Insider Monkey, Cliff Asness’s AQR Capital Management has the biggest position in Everest Re Group Ltd (NYSE:RE), worth close to $346.4 million, amounting to 0.3% of its total 13F portfolio. The second largest stake is held by Brian Ashford-Russell and Tim Woolley of Polar Capital, with a $29.7 million position; 0.3% of its 13F portfolio is allocated to the stock. Some other hedge funds and institutional investors that are bullish include Israel Englander’s Millennium Management, Richard S. Pzena’s Pzena Investment Management and Jim Simons’s Renaissance Technologies.

Due to the fact that Everest Re Group Ltd (NYSE:RE) has faced falling interest from the smart money, it’s easy to see that there exists a select few fund managers that decided to sell off their positions entirely by the end of the third quarter. Intriguingly, Anand Parekh’s Alyeska Investment Group dropped the biggest investment of the 700 funds watched by Insider Monkey, totaling about $7.5 million in stock, and Gregg Moskowitz’s Interval Partners was right behind this move, as the fund dropped about $6.3 million worth. These bearish behaviors are interesting, as aggregate hedge fund interest was cut by 6 funds by the end of the third quarter.

As you can see these stocks had an average of 30.75 hedge funds with bullish positions and the average amount invested in these stocks was $1.03 billion. That figure was $487 million in RE’s case. Parsley Energy Inc (NYSE:PE) is the most popular stock in this table. On the other hand Federal Realty Investment Trust (NYSE:FRT) is the least popular one with only 21 bullish hedge fund positions. Compared to these stocks Everest Re Group Ltd (NYSE:RE) is even less popular than FRT. Considering that hedge funds aren’t fond of this stock in relation to other companies analyzed in this article, it may be a good idea to analyze it in detail and understand why the smart money isn’t behind this stock. This isn’t necessarily bad news. Although it is possible that hedge funds may think the stock is overpriced and view the stock as a short candidate, they may not be very familiar with the bullish thesis. In either case more research is warranted.