EPAM Systems Inc (NYSE:EPAM) shareholders have witnessed a decrease in hedge fund interest of late. Our calculations also showed that EPAM isn’t among the 30 most popular stocks among hedge funds.

What have hedge funds been doing with EPAM Systems Inc (NYSE:EPAM)? 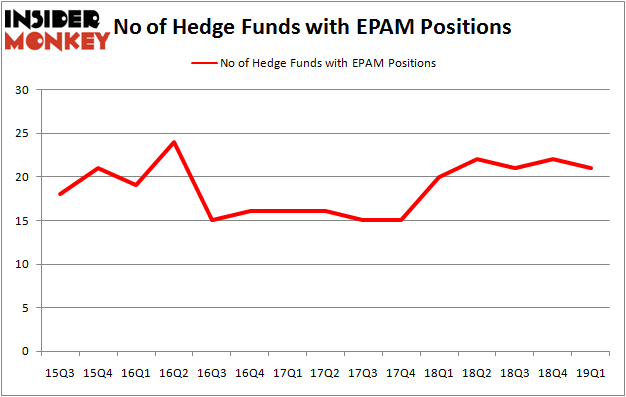 When looking at the institutional investors followed by Insider Monkey, AQR Capital Management, managed by Cliff Asness, holds the most valuable position in EPAM Systems Inc (NYSE:EPAM). AQR Capital Management has a $17 million position in the stock, comprising less than 0.1%% of its 13F portfolio. The second most bullish fund manager is Atika Capital, managed by Brad Farber, which holds a $7.1 million position; 1.4% of its 13F portfolio is allocated to the company. Remaining members of the smart money that hold long positions contain Israel Englander’s Millennium Management, Richard Driehaus’s Driehaus Capital and Phill Gross and Robert Atchinson’s Adage Capital Management.

Judging by the fact that EPAM Systems Inc (NYSE:EPAM) has faced declining sentiment from the entirety of the hedge funds we track, it’s safe to say that there is a sect of funds who sold off their full holdings in the third quarter. It’s worth mentioning that Ken Griffin’s Citadel Investment Group said goodbye to the biggest investment of the “upper crust” of funds tracked by Insider Monkey, worth about $4.4 million in stock. Brandon Osten’s fund, Venator Capital Management, also cut its stock, about $4 million worth. These moves are important to note, as total hedge fund interest was cut by 1 funds in the third quarter.

As you can see these stocks had an average of 31.25 hedge funds with bullish positions and the average amount invested in these stocks was $1203 million. That figure was $72 million in EPAM’s case. Bio-Rad Laboratories, Inc. (NYSE:BIO) is the most popular stock in this table. On the other hand Henry Schein, Inc. (NASDAQ:HSIC) is the least popular one with only 22 bullish hedge fund positions. Compared to these stocks EPAM Systems Inc (NYSE:EPAM) is even less popular than HSIC. Hedge funds clearly dropped the ball on EPAM as the stock delivered strong returns, though hedge funds’ consensus picks still generated respectable returns. Our calculations showed that top 20 most popular stocks among hedge funds returned 1.9% in Q2 through May 30th and outperformed the S&P 500 ETF (SPY) by more than 3 percentage points. A small number of hedge funds were also right about betting on EPAM as the stock returned 2.3% during the same period and outperformed the market by an even larger margin.