Encompass Health Corporation (NYSE:EHC) shareholders have witnessed a decrease in hedge fund sentiment of late. Our calculations also showed that ehc isn’t among the 30 most popular stocks among hedge funds. 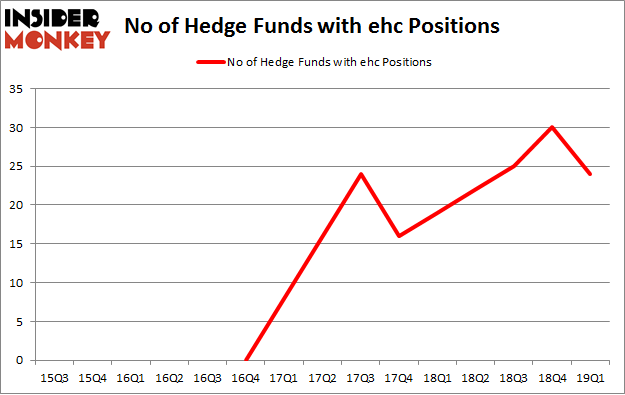 Among these funds, Renaissance Technologies held the most valuable stake in Encompass Health Corporation (NYSE:EHC), which was worth $130.7 million at the end of the first quarter. On the second spot was D E Shaw which amassed $53 million worth of shares. Moreover, Rock Springs Capital Management, Two Sigma Advisors, and Millennium Management were also bullish on Encompass Health Corporation (NYSE:EHC), allocating a large percentage of their portfolios to this stock.

Seeing as Encompass Health Corporation (NYSE:EHC) has experienced declining sentiment from hedge fund managers, it’s easy to see that there exists a select few fund managers who sold off their entire stakes by the end of the third quarter. It’s worth mentioning that Vishal Saluja and Pham Quang’s Endurant Capital Management cut the biggest stake of the 700 funds tracked by Insider Monkey, worth close to $5.3 million in stock, and Anand Parekh’s Alyeska Investment Group was right behind this move, as the fund dumped about $1.9 million worth. These moves are interesting, as total hedge fund interest was cut by 6 funds by the end of the third quarter.

As you can see these stocks had an average of 17.75 hedge funds with bullish positions and the average amount invested in these stocks was $282 million. That figure was $465 million in EHC’s case. First American Financial Corp (NYSE:FAF) is the most popular stock in this table. On the other hand Brookfield Renewable Partners L.P. (NYSE:BEP) is the least popular one with only 3 bullish hedge fund positions. Encompass Health Corporation (NYSE:EHC) is not the most popular stock in this group but hedge fund interest is still above average. Our calculations showed that top 20 most popular stocks among hedge funds returned 1.9% in Q2 through May 30th and outperformed the S&P 500 ETF (SPY) by more than 3 percentage points. Hedge funds were also right about betting on EHC, though not to the same extent, as the stock returned 1.6% during the same time frame and outperformed the market as well.