Here is What Hedge Funds Think About DowDuPont Inc. (DWDP)

Does DowDuPont Inc. (NYSE:DWDP) represent a good buying opportunity at the moment? Let’s briefly check the hedge fund interest towards the company. Hedge fund firms constantly search out bright intellectuals and highly-experienced employees and throw away millions of dollars on research activities, so it is no wonder why they tend to generate millions in profits each year. It is also true that some hedge fund players fail unconceivably on some occasions, but their stock picks have been generating superior risk-adjusted returns on average over the years.

DowDuPont Inc. (NYSE:DWDP) has seen a decrease in hedge fund sentiment in recent months. DWDP was in 69 hedge funds’ portfolios at the end of September. There were 75 hedge funds in our database with DWDP positions at the end of the previous quarter. Our calculations also showed that DWDP is among the 30 most popular stocks among hedge funds. 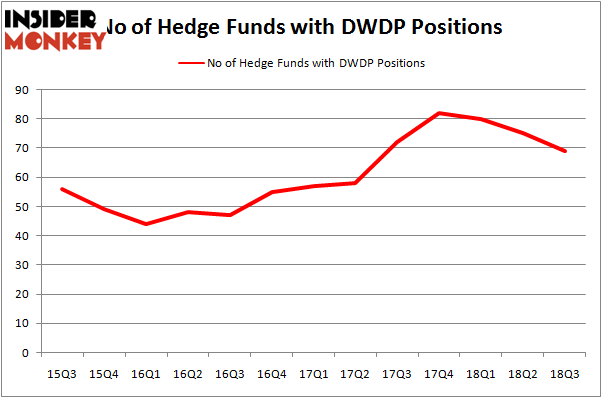 The largest stake in DowDuPont Inc. (NYSE:DWDP) was held by Third Point, which reported holding $781.4 million worth of stock at the end of September. It was followed by Viking Global with a $668 million position. Other investors bullish on the company included Glenview Capital, OZ Management, and Suvretta Capital Management.

Since DowDuPont Inc. (NYSE:DWDP) has faced falling interest from the aggregate hedge fund industry, we can see that there were a few money managers who were dropping their positions entirely last quarter. At the top of the heap, Doug Silverman and Alexander Klabin’s Senator Investment Group dropped the largest stake of the 700 funds monitored by Insider Monkey, worth about $191.2 million in stock. Dmitry Balyasny’s fund, Balyasny Asset Management, also cut its stock, about $144 million worth. These moves are interesting, as aggregate hedge fund interest dropped by 6 funds last quarter.

As you can see these stocks had an average of 42.75 hedge funds with bullish positions and the average amount invested in these stocks was $2522 million. That figure was $4551 million in DWDP’s case. NIKE, Inc. (NYSE:NKE) is the most popular stock in this table. On the other hand AbbVie Inc (NYSE:ABBV) is the least popular one with only 40 bullish hedge fund positions. Compared to these stocks DowDuPont Inc. (NYSE:DWDP) is more popular among hedge funds. Considering that hedge funds are fond of this stock in relation to its market cap peers, it may be a good idea to analyze it in detail and potentially include it in your portfolio.

Here is What Hedge Funds Think About Kennedy-Wilson Holdings Inc (NYSE:KW)
Monthly Newsletter Strategy
Download a free copy of our newsletter and see the details inside!
Hedge Fund Resource Center
Related News
Is DowDuPont Inc. (DWDP) A Good Stock To Buy? 25 Most Popular Stocks Among Hedge Funds in 2018 Billionaires Were Buying These Stocks in Q2 When Everyone Else Was Selling Five Agrochemical Stocks Hedge Funds Like Billionaires Just Love These Stocks That Pay High Taxes 10 Most Ruthless Companies in Business Today 12 Largest Agricultural Companies by Revenue in the World 5 Most Socially Responsible Companies in America 5 Ways You Can Eliminate Credit Card Debt 10 Easiest Road Test Sites in NY and NJ
Billionaire Hedge Funds