While the market driven by short-term sentiment influenced by uncertainty regarding the future of the interest rate environment in the US, declining oil prices and the trade war with China, many smart money investors are keeping their optimism regarding the current bull run, while still hedging many of their long positions. However, as we know, big investors usually buy stocks with strong fundamentals, which is why we believe we can profit from imitating them. In this article, we are going to take a look at the smart money sentiment surrounding Douglas Emmett, Inc. (NYSE:DEI).

Is Douglas Emmett, Inc. (NYSE:DEI) a bargain? Money managers are in a bullish mood. The number of long hedge fund bets improved by 3 recently. Our calculations also showed that DEI isn’t among the 30 most popular stocks among hedge funds.

What does the smart money think about Douglas Emmett, Inc. (NYSE:DEI)?

At the end of the third quarter, a total of 14 of the hedge funds tracked by Insider Monkey were bullish on this stock, a change of 27% from the second quarter of 2018. The graph below displays the number of hedge funds with bullish position in DEI over the last 13 quarters. With hedgies’ positions undergoing their usual ebb and flow, there exists a select group of key hedge fund managers who were upping their holdings meaningfully (or already accumulated large positions). 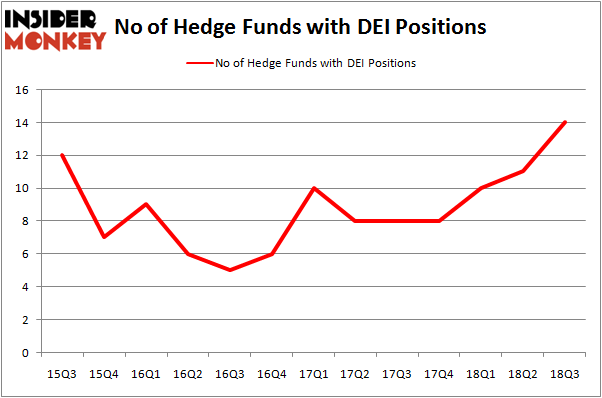 More specifically, Renaissance Technologies was the largest shareholder of Douglas Emmett, Inc. (NYSE:DEI), with a stake worth $133 million reported as of the end of September. Trailing Renaissance Technologies was Millennium Management, which amassed a stake valued at $55.4 million. AEW Capital Management, D E Shaw, and Citadel Investment Group were also very fond of the stock, giving the stock large weights in their portfolios.

With a general bullishness amongst the heavyweights, specific money managers were leading the bulls’ herd. Marshall Wace LLP, managed by Paul Marshall and Ian Wace, assembled the largest position in Douglas Emmett, Inc. (NYSE:DEI). Marshall Wace LLP had $14.2 million invested in the company at the end of the quarter. Paul Tudor Jones’s Tudor Investment Corp also made a $3.1 million investment in the stock during the quarter. The following funds were also among the new DEI investors: Matthew Tewksbury’s Stevens Capital Management, Peter Rathjens, Bruce Clarke and John Campbell’s Arrowstreet Capital, and Alec Litowitz and Ross Laser’s Magnetar Capital.

Let’s check out hedge fund activity in other stocks – not necessarily in the same industry as Douglas Emmett, Inc. (NYSE:DEI) but similarly valued. We will take a look at National Instruments Corporation (NASDAQ:NATI), Berry Global Group Inc (NYSE:BERY), Sealed Air Corporation (NYSE:SEE), and BOK Financial Corporation (NASDAQ:BOKF). All of these stocks’ market caps are similar to DEI’s market cap.

As you can see these stocks had an average of 26.5 hedge funds with bullish positions and the average amount invested in these stocks was $872 million. That figure was $345 million in DEI’s case. Berry Global Group Inc (NYSE:BERY) is the most popular stock in this table. On the other hand BOK Financial Corporation (NASDAQ:BOKF) is the least popular one with only 16 bullish hedge fund positions. Compared to these stocks Douglas Emmett, Inc. (NYSE:DEI) is even less popular than BOKF. Considering that hedge funds aren’t fond of this stock in relation to other companies analyzed in this article, it may be a good idea to analyze it in detail and understand why the smart money isn’t behind this stock. This isn’t necessarily bad news. Although it is possible that hedge funds may think the stock is overpriced and view the stock as a short candidate, they may not be very familiar with the bullish thesis. In either case more research is warranted.