During the first half of the fourth quarter the Russell 2000 ETF (IWM) lagged the larger S&P 500 ETF (SPY) by about 4 percentage points as investors worried over the possible ramifications of rising interest rates. The hedge funds and institutional investors we track typically invest more in smaller-cap stocks than an average investor (i.e. only 298 S&P 500 constituents were among the 500 most popular stocks among hedge funds), and we have seen data that shows those funds paring back their overall exposure. Those funds cutting positions in small-caps is one reason why volatility has increased. In the following paragraphs, we take a closer look at what hedge funds and prominent investors think of Delphi Technologies PLC (NYSE:DLPH) and see how the stock is affected by the recent hedge fund activity.

Delphi Technologies PLC (NYSE:DLPH) has experienced a decrease in support from the world’s most elite money managers in recent months. DLPH was in 22 hedge funds’ portfolios at the end of the third quarter of 2018. There were 23 hedge funds in our database with DLPH holdings at the end of the previous quarter. Our calculations also showed that DLPH isn’t among the 30 most popular stocks among hedge funds.

How have hedgies been trading Delphi Technologies PLC (NYSE:DLPH)?

Heading into the fourth quarter of 2018, a total of 22 of the hedge funds tracked by Insider Monkey were long this stock, a change of -4% from the second quarter of 2018. By comparison, 30 hedge funds held shares or bullish call options in DLPH heading into this year. With the smart money’s capital changing hands, there exists an “upper tier” of noteworthy hedge fund managers who were adding to their stakes significantly (or already accumulated large positions). 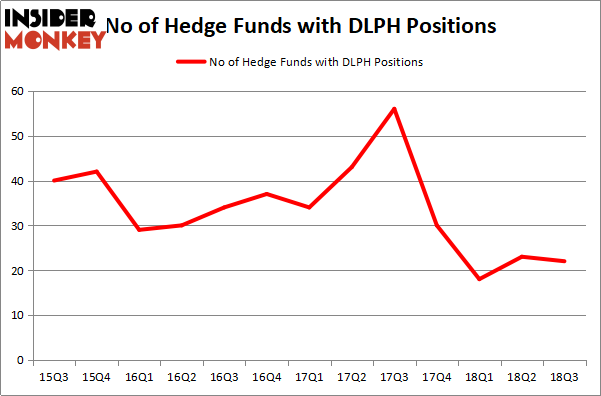 The largest stake in Delphi Technologies PLC (NYSE:DLPH) was held by Glenview Capital, which reported holding $72.5 million worth of stock at the end of September. It was followed by Citadel Investment Group with a $56.3 million position. Other investors bullish on the company included D E Shaw, Millennium Management, and Impax Asset Management.

Due to the fact that Delphi Technologies PLC (NYSE:DLPH) has experienced falling interest from the aggregate hedge fund industry, logic holds that there were a few hedge funds that decided to sell off their positions entirely last quarter. At the top of the heap, Andrew Immerman and Jeremy Schiffman’s Palestra Capital Management said goodbye to the largest stake of the 700 funds tracked by Insider Monkey, valued at about $81.6 million in stock. Ben Levine, Andrew Manuel and Stefan Renold’s fund, LMR Partners, also dropped its stock, about $4.3 million worth. These transactions are interesting, as total hedge fund interest was cut by 1 funds last quarter.

As you can see these stocks had an average of 16.75 hedge funds with bullish positions and the average amount invested in these stocks was $140 million. That figure was $296 million in DLPH’s case. FTI Consulting, Inc. (NYSE:FCN) is the most popular stock in this table. On the other hand Outfront Media Inc (NYSE:OUT) is the least popular one with only 13 bullish hedge fund positions. Compared to these stocks Delphi Technologies PLC (NYSE:DLPH) is more popular among hedge funds. Considering that hedge funds are fond of this stock in relation to its market cap peers, it may be a good idea to analyze it in detail and potentially include it in your portfolio.

Hedge Funds Are Crazy About Orbotech Ltd. (ORBK)
Monthly Newsletter Strategy
Download a free copy of our newsletter and see the details inside!
Hedge Fund Resource Center
Related News
Hedge Funds Are Buying Delphi Automotive PLC (DLPH) Why You Should Consider Investing in Delphi Automotive PLC (DLPH), Tempur Sealy International Inc (TPX), & Two Other Stocks Why Wells Fargo, Sarepta, Delphi, UPS, and More Are Making Headlines Here’s Why These Five Stocks Are in Spotlight Insider Buying Points to Rebound for 3 Battered Stocks A Look Into Ecofin’s Eco-Friendly Stock Moves Heading Into 2016: From SunPower To SolarEdge Is Delphi Automotive PLC (DLPH) A Good Stock To Buy? Five Reasons You Need a Day-Trading Mentor 15 Most Important Medical Discoveries of 2018 The 10 Best Islands to Visit in 2019
Billionaire Hedge Funds