Insider Monkey has processed numerous 13F filings of hedge funds and famous investors to create an extensive database of hedge fund holdings. The 13F filings show the hedge funds and investors’ positions as of the end of the third quarter. You can find write-ups about an individual hedge fund’s trades on numerous financial news websites. However, in this article we will take a look at their collective moves and analyze what the smart money thinks of Cullen/Frost Bankers, Inc. (NYSE:CFR) based on that data.

Cullen/Frost Bankers, Inc. (NYSE:CFR) shareholders have witnessed a decrease in enthusiasm from smart money in recent months. CFR was in 18 hedge funds’ portfolios at the end of September. There were 21 hedge funds in our database with CFR positions at the end of the previous quarter. Our calculations also showed that CFR isn’t among the 30 most popular stocks among hedge funds.

At Q3’s end, a total of 18 of the hedge funds tracked by Insider Monkey were bullish on this stock, a change of -14% from one quarter earlier. By comparison, 12 hedge funds held shares or bullish call options in CFR heading into this year. With the smart money’s sentiment swirling, there exists a select group of key hedge fund managers who were increasing their holdings significantly (or already accumulated large positions). 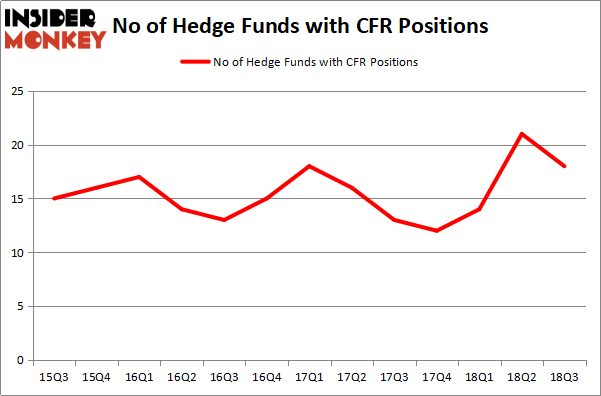 Among these funds, Park Presidio Capital held the most valuable stake in Cullen/Frost Bankers, Inc. (NYSE:CFR), which was worth $52.2 million at the end of the third quarter. On the second spot was Marshall Wace LLP which amassed $32.3 million worth of shares. Moreover, Arrowstreet Capital, Two Sigma Advisors, and Carlson Capital were also bullish on Cullen/Frost Bankers, Inc. (NYSE:CFR), allocating a large percentage of their portfolios to this stock.

Due to the fact that Cullen/Frost Bankers, Inc. (NYSE:CFR) has witnessed declining sentiment from hedge fund managers, logic holds that there were a few fund managers who were dropping their positions entirely last quarter. Interestingly, Israel Englander’s Millennium Management dropped the largest stake of the “upper crust” of funds monitored by Insider Monkey, worth close to $21.1 million in stock, and Ken Griffin’s Citadel Investment Group was right behind this move, as the fund dumped about $10.9 million worth. These moves are interesting, as total hedge fund interest fell by 3 funds last quarter.

As you can see these stocks had an average of 17.5 hedge funds with bullish positions and the average amount invested in these stocks was $214 million. That figure was $170 million in CFR’s case. Fair Isaac Corporation (NYSE:FICO) is the most popular stock in this table. On the other hand Erie Indemnity Company (NASDAQ:ERIE) is the least popular one with only 14 bullish hedge fund positions. Cullen/Frost Bankers, Inc. (NYSE:CFR) is not the most popular stock in this group but hedge fund interest is still above average. This is a slightly positive signal but we’d rather spend our time researching stocks that hedge funds are piling on. In this regard FICO might be a better candidate to consider a long position.